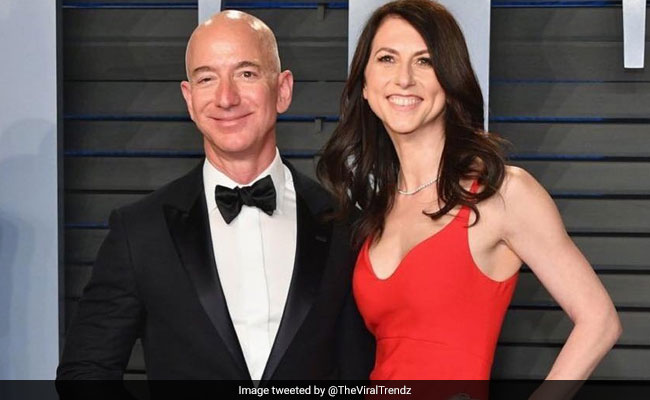 The announcement by Amazon founder Jeff Bezos, the world’s wealthiest man, and his wife that they will divorce has captivated the imagination — how will they split his giant fortune, estimated at $136 billion?

And what will happen to the Internet retail giant — will his soon-to-be ex get a significant stake, and how would that affect his control of the company?

The couple met in 1992 when he was a hedge fund manager on Wall Street, before he became an entrepreneur who changed the way hundreds of millions of people live. They married less than a year later.

She was by his side for the entire Amazon adventure, from the company’s humble beginnings in his Seattle garage in 1994 to its mammoth success today. They have four children — three sons and an adopted daughter — aged up to their late teens.

As of Wednesday, when the couple formally announced they would divorce after a long separation, the 48-year-old MacKenzie, a novelist, is likely to become the richest woman in the world.

According to celebrity news outlet TMZ, the Bezoses did not have a prenuptial agreement — which could mean an even split of assets.

They were married in Florida in September 1993, according to documents seen by AFP. But their last place of residence would be the deciding factor in any divorce proceedings.

The couple has numerous residences: in Seattle, where Amazon is based, but also in Washington DC, Texas and Beverly Hills, California.

According to Randall Kessler, a founding partner at Atlanta family law firm Kessler and Solomiany, the location will not matter so much.

“Some states have community property, some states have equitable division which means fair division, but even in those states, it usually comes out 50-50. That’s the starting point,” he said.

Bezos, who was once Amazon’s primary stakeholder, now owns about 16 percent of the company — the bulk of his net worth.

At mid-day Thursday, that stake translated to about $130 billion.

Any divorce settlement would include his stock portfolio. If it were split in half, that would leave Bezos — who still runs the company — with an eight percent stake.

So far, that prospect has not frayed Wall Street, with Amazon shares even up slightly on the Nasdaq on Wednesday after the announcement, only to fall back Thursday.

Hedge fund investor Doug Kass announced that he had sold off his shares after the divorce announcement — which had an upbeat tone, with the pair saying they remained “cherished friends.”

Given they appear to be on good terms, they could decide to put their shares into a trust or other legal mechanism in order to maintain the same power among Amazon’s shareholders.

MacKenzie could also opt to transfer her voting rights, should she earn half the stake in a settlement, according to Margaret Ryznar, a law professor at Indiana University – Purdue University Indianapolis (IUPUI).

“Voting rights may not be that important in this case because Jeff Bezos is currently a minority shareholder anyway,” Ryznar says.

“Much of his influence in Amazon comes instead from his position within the company as its founder and CEO.”

For Kessler, “if they want to protect the company, they’ll find a way to give her an interest in the company that doesn’t affect the running of the company.”

Of course, the couple may have a post-nuptial deal that will be revealed in the coming months.

They may also end up in an acrimonious divorce, which would surely cloud the prospects of Amazon, both on Wall Street and from a public relations perspective.

The National Enquirer tabloid reported Thursday that Bezos was in a relationship with the wife of powerful Hollywood talent agent Patrick Whitesell, former news anchor and entertainment reporter Lauren Sanchez.

The relationship, launched eight months ago, was the final nail in the coffin of the troubled Bezos marriage, the tabloid said.

“Clients come to see me all the time and they always say that this is going to be uncontested — ‘We’re both reasonable, we both agree that it should be fair’,” Kessler says.

“The problem sometimes is that people disagree on what fair is, or on what reasonable is. Right now they agree. I hope they continue to agree, but who knows what they might disagree on.”

And any disagreement would be a field day for their attorneys.

“If they disagree, that’s where lawyers make money,” Kessler said.

When asked about the Bezos divorce on Thursday, President Donald Trump, himself twice divorced, said: “I wish him luck. It’s going to be a beauty.”