​When Barcelona made repeated offers for Chelsea’s Willian last summer, many fans could not understand why. What’s more, they really couldn’t understand why Chelsea rejected their bids.

Believe it or not, the rumours are back. Barcelona were rumoured to be preparing a £50m bid for the Chelsea winger, and even offered 21-year-old Malcom in exchange. But still, weirdly, oddly, incredibly, Chelsea have knocked it back. Most fans are screaming for the Blues to accept their offer this time around, given the player’s poor form. Here are 20 reasons why he just has to go.

As Chelsea‘s second-most creative player, Willian has failed to register an assist in 227 separate matches for the Blues. Not great.

Chelsea let most of their 30-year-olds walk for free at the end of their deals, but getting £50m instead probably makes too much sense for the Chelsea board.

3. Callum Hudson-Odoi Should Take His Place

Hudson-Odoi is a better player now, and he will be for the next 12 years (unless Bayern Munich are reading this, in which case Willian is great! You should sign him instead!) The least he could do would be to pass to Eden Hazard and let him work his magic, it’s not that hard.

5. They Would Actually Get Money for Him

Most fans would even pay for his flight away from London.

6. They Could Even Get an Exciting Youngster in Return

Malcom is the heir to Willian’s Brazilian throne, but he’s actually just a better player already. 7. All He Does Is ‘Hate Tottenham’

When your best contribution to a team is a catchy chant, something has clearly gone wrong.

Sure, he runs a lot, but he usually just runs right into trouble.

9. He’s Well Past His Underwhelming Peak

​Only twice has he netted more than five Premier League goals in a season. How prolific. Sticking emojis over Antonio Conte’s face sounds like something an 11-year-old would do.

11. Seriously, He Is Not Good Enough

Why does he constantly shoot instead of just passing the ball across goal? Even Alvaro Morata would have scored more.

The true test of Lionel Messi‘s ability would be whether he can withstand Willian’s infuriating choices.​ In December, Chelsea paid Willian almost £500,000, and got one goal and one assist in return. What a bargain.

14. He Can’t Even Assist Eden Hazard

He has the same amount of assists to Hazard as Juan Mata, who only spent three years at the club.

15. He’s Not Even That Good at Free Kicks Anymore

There’s nothing like a commentator hyping up Willian’s free-kick ability before watching him fail to beat the wall. 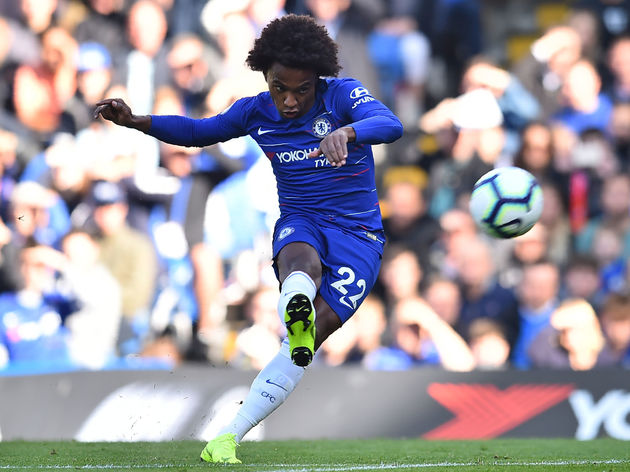 16. He Makes Some Crazy Decisions on the Pitch

17. He’s Near the End of His Contract

He’d probably be allowed to leave for free in the summer of 2020, so why not speed things up?

18. Christian Pulisic Is Already on His Way in

Please don’t say that Willian would keep both Hudson-Odoi and Christian Pulisic out of the lineup. 19. What if Barcelona Come to Their Senses?

One day, Barcelona could wake up and realise that Willian is not worth £50m, and Chelsea can’t afford to be caught out when they do.

20. Did We Mention He’s Not Good Enough?

Chelsea Planning to Allow Willian to Leave for Free as Juventus...

Kiara Advani claims to be finally getting her due, says 'I...

Luka Jovic to Cut Holiday Short and Report for Pre-Season in...