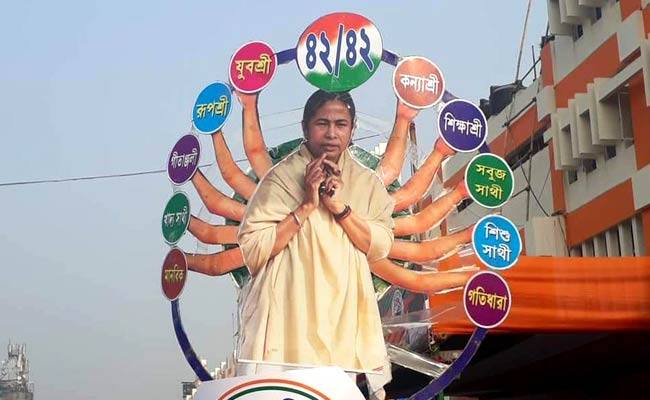 If the bigger than life measurement posters throughout Kolkata are something to go by, Trinamool Congress chief and West Bengal Chief Minister Mamata Banerjee has pulled all stops to ship out a message that she is prepared for take-off and carve out an even bigger position in Delhi politics. Taking the microphone, she welcomed the leaders and requested her supporters to patiently take heed to speakers of all the parties.

On Twitter, the Trinamool Congress put out glimpses of rallies and the posters taken out throughout West Bengal. Summarizing her achievements and schemes for all sections of the individuals, one of many posters confirmed her as goddess Durga with ten palms. 42/24 mentioned a crown-like cutout on Didi’s head, indicating her occasion will sweep the Lok Sabha polls by profitable all 42 seats of the state.

The 5 palms on her left, identical to Durga’s 5 weapons, had cutouts that learn Kanyashree, Shikhyashree, Shabuj Shathi, Shishu Shathi and Gatidhara. The opposite 5 palms on the left had Yuvashree, Rupashree, Gitanjali, Khadya Sathi and Manabik. All of those are names of a number of ongoing schemes within the state.

Underneath Kanyashree, women lower than 18 and from economically backward households are eligible for money advantages. The Shikhyashree is a scholarship scheme for SC/ST college students in Lessons 5 to eight. Sabooj Sathi is a scheme that provides bicycles to college students in Lessons 9 to 12. Shishu Saathi, a flagship healthcare programme of Ms Banerjee, was flagged off in August, to offer free paediatric cardiac surgical procedure to three,000 youngsters every year. Gatidhara is aimed to inspire unemployed youth by providing loans to purchase industrial autos that may generate earnings. Rupashree is a one-time grant of Rs. 25,000, given to underprivileged women above 18 for marriage functions. Gitanjali is the state authorities’s housing scheme for economically poorer sections. Khadya Sathi is for the poor, who get rice and wheat at Rs 2 per kg and Manabik is a scheme for the bodily challenged.

Lastly on the foot of the enormous poster, is a cutout that claims, right now’s rally of unity at Brigade Parade Floor, with a emblem of Trinamool Congress within the centre, is the “way forward for the nation”.

One other giant poster taken out at Chakdah in Nadia district, exhibits Mamata Banerjee, with folded palms, at India Gate in Delhi. With the tricolor atop of the poster, it reads “Chalo paltai. Let’s go to Delhi now”.