If there was ever a case for giving that promising youth team player a few minutes here and there, it would be Jadon Sancho.

Sancho left Manchester City for Borussia Dortmund for £8m in 2017 without ever making a first-team appearance for the Citizens. The young winger understood he wouldn’t get regular playing time at City and that Dortmund, a club known for developing younger players, would be a good place to cut his teeth. Safe to say, the move was successful. Sancho suffered injury problems in his first season in Germany, but came back stronger. In his subsequent two seasons at the Westfalenstadion, the winger developed a goal-to-game ratio that would be the envy of most strikers, scoring 30 in 78 for Dortmund.

Having achieved so much in his short career already, we’d thought we’d compile five of the best career moments so far. When Sancho earned his first senior cap for England in October 2018, he became the first ​Bundesliga player to do so since Owen Hargreaves. It took him a while to make an impact, but when he did, he bagged a brace. Sancho doesn’t do unspectacular.

Playing Kosovo in a Euro 2020 qualifier, Sancho met a Raheem Sterling pass in the box, taking a couple of touches before striking it cleanly into the bottom corner, putting the Three Lions 4-1 up.

Just a minute later, Sancho scored again. It was a mere tap-in, but it secured a brace for the winger and ensured that his name was in the sports headlines the following morning. 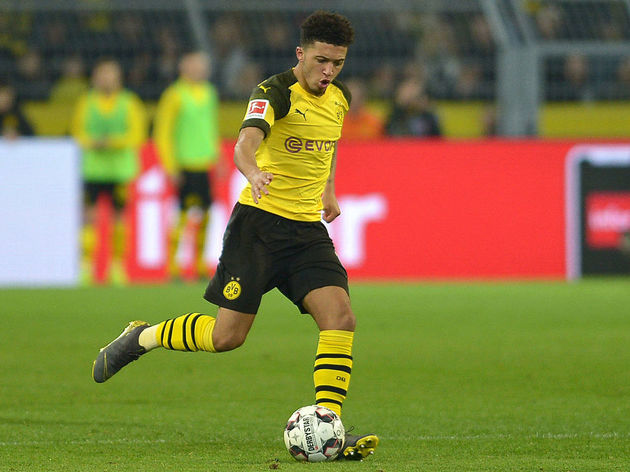 Facing Bayer Leverkusen in the midst of ​Dortmund‘s title challenge in 2018/19, Sancho put Der BVB 2-1 up seven minutes before half-time with an amazing volley.

Meeting the end of an Abdou Diallo cross, Sancho hit the ball with the side of his boot, rocketing it into the net. So spectacular was the strike that it was voted as Bundesliga’s Goal of the Month for February 2019. Playing fierce rivals ​Schalke at the Veltins Arena in December 2018, Dortmund had been 1-0 up for much of the game before Die Königsblauen equalised in the 61st minute through Daniel Caligiuri. Having led the game for so long, Dortmund were desperate to find a winning goal and earn the bragging rights.

Cue Sancho. In the 74th minute, the Englishman was the subject of a pass from Raphaël Guerreiro. Instead of crossing it to a waiting teammate, Sancho opted to dribble into the box and calmly slid the ball past Schalke goalkeeper Ralf Fährmann, securing the win over their local rivals and entering Dortmund folklore.

Leading the Bundesliga Assists Chart in 2018/19 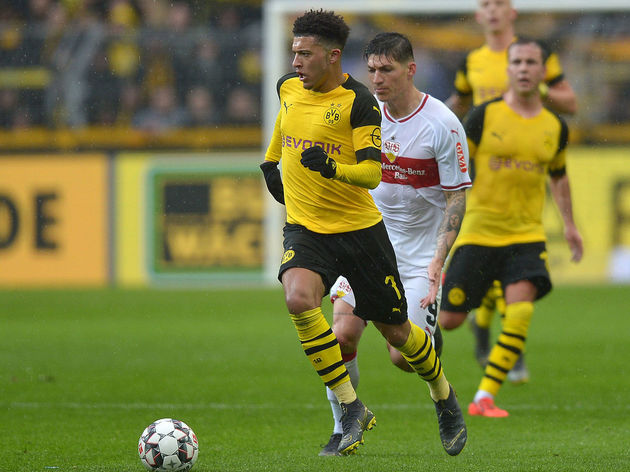 In his first full season with Dortmund, Sancho found himself topping the Bundesliga assists chart, directly contributing to a total of 18 goals as he was ever-present during Der BVB’s title challenge.

The 20-year-old is currently on track to beating that total this season, making 16 assists so far, including four in his last five games. He currently sits joint-top of the assists chart with ​Bayern Munich‘s Thomas Müller and will be aiming to surpass him to top the chart for the second consecutive season. Sancho contributed a goal and an assist as Dortmund beat Bayern Munich 2-0 in 2019’s DFL-Supercup final. It was the first piece of major silverware in Sancho’s career and Der BVB’s first DFL-Supercup win since 2014.

His goal was a pretty special one, too. Sprinting with the ball at his feet for much of Bayern’s end of the pitch, Der FCB’s defence were powerless to stop him and he struck the ball past Manuel Neuer to secure the trophy for his side.

Best Bundesliga XI of the Season So Far

Best Bundesliga XI of the Season So Far

Arjun Singh Devgan - April 10, 2020 0
The world of football at present generates a lot of money and one of the main reasons is due to the players. Without the...