Members of the Gujjar community continued to block railway tracks on the second day of their agitation today to demand implementation of the 5 per cent reservation that was promised to them by the Rajasthan government. Agitating Gujjars sat on railway tracks at Malarna Doongar near Sawai Madhopur, leading to the cancellation of five trains and the re-routing of 15.

The blocked railway line in the West Central Railway connects Delhi to Mumbai. The Delhi-Jaipur-Agra line, however, remains clear.

Gujjar leader Kirori Singh Bainsla started a dharna yesterday along with his supporters on the railway tracks in Rajasthan’s Sawai Madhopur district, demanding reservation for five communities including Gujjars.

The agitation comes nearly a month after 10 per cent quota for the economically weaker sections in the general category in jobs and education was cleared by parliament. The move was introduced as a constitutional amendment, passed in parliament and enacted in a matter of days.

However, the validity of the 10 per cent quota will be examined by the Supreme Court. The government has argued that since the bill provides reservation on basis of income, not caste, it was not subject to the 50 per cent bar. 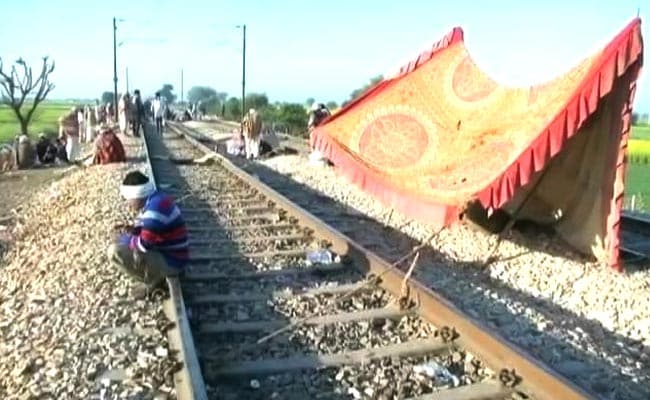 The agitation comes nearly a month after 10 per cent quota for the economically weaker sections in the general category in jobs and education was cleared by parliament.

“We have a good chief minister and a good prime minister. We want that they listen to the demands of Gujjar community. It isn’t an uphill task for them to provide reservation,” an agitating member of the Gujjar community told news agency ANI.

The Gujjars say if 10 per cent reservation for the economically backward can be passed, then why not for them.

“We want 5 per cent reservation. The government hasn’t responded to my request. So, I am going to start an agitation,” Mr Bainsla told news agency ANI.

The bill to this effect, which was introduced in the monsoon session of the state assembly in 2017, was put on hold by the Rajasthan High Court after an appeal against it.