​It’s fair to say that Arsenal are specialists in the FA Cup, having lifted the trophy more times than any other side in history, with 13 triumphs in the historic competition. Aside from multiple titles, however, there have been some more than memorable moments in the tournament that will live long in the Gunners’ supporters’ memory.

The club have made it to a staggering 20 finals, with their first success dating back to 1930, all the way to their most recent in 2017, with numerous unforgettable moments along the way.

Here are six of the best moments in ​Arsenal‘s FA history. Scoring against your old club never looked sweeter than when Danny Welbeck did so against ​Manchester United in the FA Cup quarter finals in 2015.

The Red Devils fan left his boyhood club to join Arsenal in September 2014 in a £16m deal after Louis Van Gaal deemed the Mancunian surplus to requirements. However, just six months later he was left to rue that error as Welbeck scored the winning goal that sent his new club to the semi-finals in the 61st minute.

Antonio Valencia’s dreadful back pass was pounced upon by Welbeck, who knocked the ball around ​David de Gea, finishing into an empty net to hand Arsenal their first win at Old Trafford since 2006. 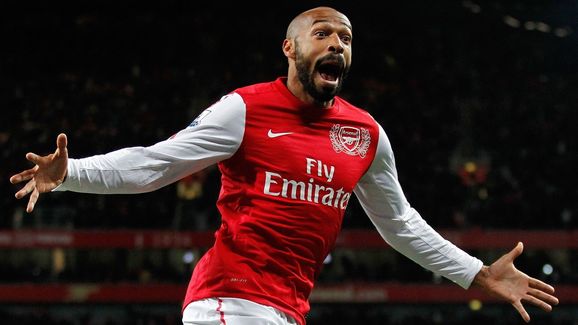 One of the greatest players to ever don the red and white colours of Arsenal, Thierry Henry made a sensational return to the club back in 2012 after signing a short-term loan deal from New York Red Bulls.

Joining the club for a second time having scored 226 goals in 369 matches, he made his second debut for the Gunners, coming on as a second-half substitute in the third round clash against Leeds United at the Emirates.

It was hard to imagine who enjoyed it more, the fans or the man himself, as he elegantly tucked away Alex Song’s pass to spark a noise inside the Emirates that few had heard before. Even better, it proved to be the winning goal on the night, and few can forget the almighty bear hug he gave Arsene Wenger after netting. It’s a goal that set Arsenal on their way to their first trophy in nine years and arguably saved Wenger his job back in 2014.

The nerves on the day were there for all to see as Arsenal crumbled in the first half, finding themselves 2-0 down after just eight minutes to a gutsy and determined Hull City side. With the Gunners looking dead and buried already, up stepped the ever reliable Santi Cazorla in the 17th minute. From about 25 yards out, Cazorla bent a sumptuous free kick into the far corner of the highest quality, with even better timing.

A Laurent Koscielny goal in the second half sent the game into extra time, before ​Aaron Ramsey‘s delightful finish in the 109th minute secured Arsenal the grand prize and keep Wenger in the Arsenal hotseat. 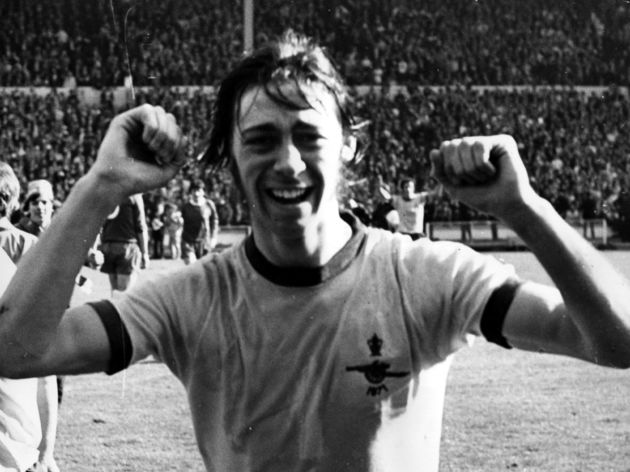 Having clinched the First Division title by a single point with a 1-0 final day win over arch rivals ​Tottenham at White Hart Lane, Arsenal went one better with one of the most iconic goals in the club’s history.

As if beating Spurs on their path to win the title wasn’t enough, Charlie George’s brilliant strike against ​Liverpool in extra time meant Arsenal had secured the league and FA Cup double, something their north London enemies had done ten years prior. John Radford had cut in from the left flank and flicked the ball to George with the outside of his right foot, with the midfielder picking it up outside the box and blasting an effort into the top right corner to send the Gunners faithful into raptures. 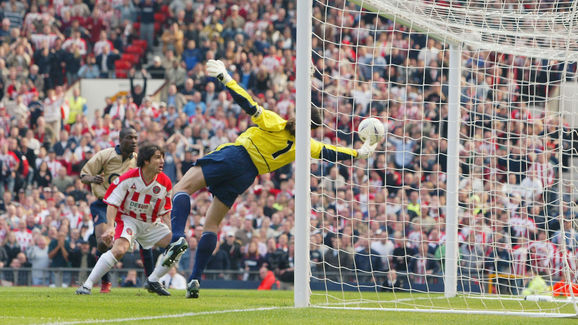 Paul Peschisolido is still to this day scratching his head, wondering how David Seaman saved his effort in 2003.

Arsenal were taking on Sheffield United in the semi-finals of the FA Cup at Old Trafford and, quite frankly, were enduring a torrid time against the Yorkshire side. The Blades played brilliantly and only went behind to Fredrik Ljungberg’s first-half goal in controversial circumstances. However, the match will be remembered for one particular moment in the dying embers of the game.

A corner was swung in by Sheffield as a scramble ensued, with Carl Asaba’s sliced volley falling to Peschisolido who was left with an empty net to head home. With the ball firmly behind him, Seaman somehow managed to throw his body back and claw the ball off the line with what must have been his fingernail, as Arsenal survived to win the match 1-0. In front of nearly 100,000 spectators at Wembley, Alan Sunderland produced one of the most memorable moments to win Arsenal the FA Cup over fierce competitors Manchester United in 1979, in what has since become known as ‘The Five Minute Final’.

The Gunners raced to a two-goal lead at half time thanks to Brian Talbot and Frank Stapleton, yet it appeared their resistance was broken when the Red Devils scored two goals in two minutes to draw the game level with less than three minutes left on the clock.

Up stepped Alan Sunderland. Liam Brady made a marauding run through the middle before feeding the ball out wide on the left to Graham Rix, whose looping cross avoided Gary Bailey in net and fell to Sunderland to slide home.