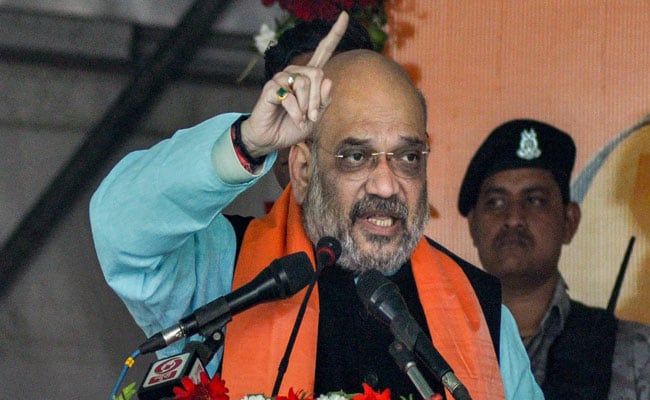 Taking a swipe at the opposition parties’ proposed “grand alliance”, BJP president Amit Shah said if it wins the Lok Sabha polls, every leader of the coalition would take turn to be prime minister for a day on six days of a week and the “country would be on holiday on Sunday”.

Addressing BJP workers near Panaji as part of the party’s ”Atal Booth Karyakarta Sammelan” he asked them to ensure that Prime Minister Narendra Modi is re-elected in the Lok Sabha polls and the party’s government would “flush out infiltrators from Kashmir to Kanyakumari to Kolkata”.

Mr Shah said that the National Register of Citizens (NRC) was aimed at identifying the “infiltrators” and said that he wanted to ask Congress president Rahul Gandhi whether the NRC exercise should be held in Goa as well.

The BJP national president said booth-level workers will help the party win the Lok Sabha polls expected to be held in April.

Taunting the opposition parties for trying to cobble up an alliance to oust the BJP from power, Mr Shah said, “The ”mahagathbandhan” will have Mayawati as PM on Monday, Akhilesh (Yadav) on Tuesday, H D Deve Gowda on Wednesday, (Chandrababu) Naidu on Thursday, (M K) Stalin on Friday and Sharad Pawar on Saturday. The country will be on holiday on Sunday.”

Earlier, speaking at a party workers” meet in Pune, Amit Shah challenged Mr Pawar to share and compare figures of farm produce procured during the UPA rule and Modi government.

Hitting out at West Bengal Chief Minister Mamata Banerjee for denying permission to BJP leaders to hold rallies in the eastern state, the BJP chief claimed that in a sting operation an “intelligence officer” had said meeting were disallowed not because of law and order apprehension but because Ms Banerjee was “scared” of the BJP.

He reiterated that the BJP is committed to building the Ram temple in Ayodhya and down played the apprehensions regarding the impact of the SP-BSP alliance in Uttar Pradesh saying his party would win 74 seats (out of 80) in the country’s most populous state.