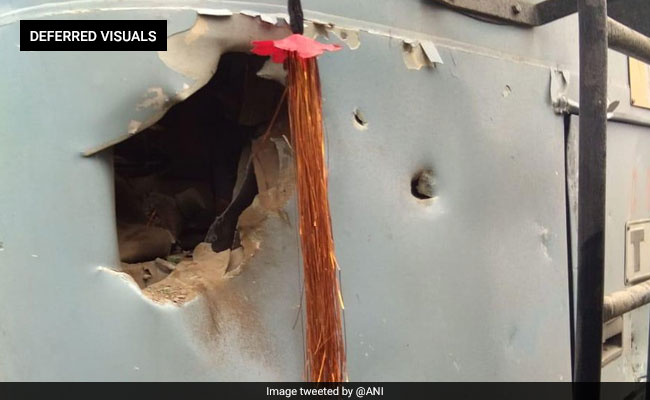 At least 10 Central Reserve Police Force (CRPF) personnel were killed and over 40 injured after terrorists targeted a convoy with a powerful explosive at Awantipora in Jammu and Kashmir’s Pulwama district today, reports said.

Terrorist group Jaish-e-Mohammed has claimed responsibility for the attack. Fifteen of the injured are said to be in a critical condition.

The nature of the device used to cause the explosion, which occurred in Goripora area, is yet to be ascertained. The injured have been moved to the army base hospital in Srinagar.

Reports suggest that the terrorists triggered the blast while the CRPF personnel were plying through the Srinagar-Jammu highway. The stretch on which the incident occurred was largely believe to be sanitised of terror activities, and the authorities have termed it as a “serious breach” of security.

“Terrible news coming from the valley. A number of CRPF soldiers are reported to have been killed & injured in an IED blast. I condemn this attack in the strongest possible terms. My prayers for the injured & condolences to the families of the bereaved,” former Chief Minister Omar Abdullah tweeted soon after the incident.

While Mr Abdullah termed it as an attack “reminiscent of the dark days of militancy pre 2004-05”, Peoples Democratic Party chief Mehbooba Mufti condemned the manner in which terrorism had brought the Valley to its knees. “Disturbing news coming in from #awantipura. Twelve of our security personnel have been martyred and several have been injured. No words are enough to condemn the gruesome terror attack. How many  more lives will be snuffed out before this madness ends?” she tweeted.

This is said to be the worst terror strike on security personnel since the Uri attack in September 2016, when four heavily armed terrorists targeted an army brigade headquarters — causing over 19 deaths. The Indian army had responded with a cross-border surgical strike in which several enemy installations were reportedly destroyed.

(With inputs from Agencies)