​For all of ​Tottenham’s silverware struggles, they are arguably the Premier League’s most entertaining side – for better or for worse – and entertainment is what we need right now.

While defending has not always been high on their list of priorities, Spurs have always delighted their fans with rampant attacking displays.

Such is the amount of highly entertaining games the club has been involved in in recent times, it is difficult to narrow a list down just a few that deserve re-watching. But we’ve given it a go anyway.

Here’s a selection of nine classic Tottenham games from the modern era that deserve your time. Is Premier League football as it good as it used to be?

Every weekend used to conjure up thrilling and high-scoring matches, particularly in derbies and big rivalry clashes.

One such game was the exhilarating 4-3 victory for Spurs over London rivals West Ham at Upton Park in 2007. The hosts led 2-0 and 3-2 during the game, but were undone by a Paul Stalteri goal in the 94th minute.

The game also includes a lovely dinked Dimitar Berbatov free kick that’s worth a gander on its own. The first League Cup final at the new Wembley Stadium saw Spurs defeat a talented Chelsea side 2-1 after extra-time – winning their only trophy since George Graham’s League Cup success in 1999.

After a Didier Drogba free kick – the third League Cup final goal of his ​Chelsea career – and a Berbatov penalty, the game rumbled into extra-time. With 94 minutes on the clock, former Real Madrid flop Jonathan Woodgate flicked a header in from a Jermaine Jenas cross to send the Spurs fans into raptures.

Tottenham would go on to finish 11th in the Premier League, while Chelsea would lose to Manchester United in the title race and the Champions League final. 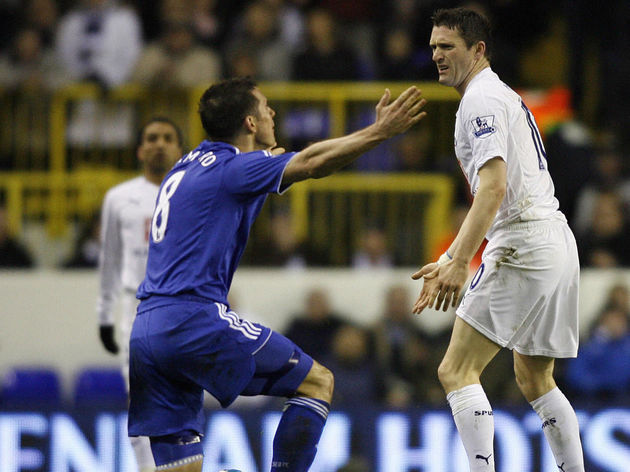 Another London derby, and another great game of football.

While Tottenham may not have won the game, any Spurs fan will enjoy watching this over and over again, even if it’s just to see Robbie Keane bend that curling effort into the top corner.

The two rivals met almost a month after Spurs’ cup success and provided another thrilling encounter. The Blues began strongly, yet the Lilywhites recovered from being 3-1 down to draw level through Tom Huddlestone and Berbatov strikes. Joe Cole’s second of the game looked to have won it, before Keane’s beautiful finish two minutes from time sealed a draw. If that’s not enough exciting football, then this game is sure to wet the appetite.

This time the opponents were ​Arsenal, with the north London derby – as it almost always does – conjuring up a breathtaking 90 plus minutes of footballing brilliance.

Despite David Bentley’s early strike putting Spurs ahead, the visitors found themselves 4-2 down with the game approaching 90 minutes. However, a goal from everyone’s favourite pundit Jenas in the 89th sparked nerves around the Emirates, before speedster Lennon tapped home in the last few seconds of injury time to leave the away fans delirious. 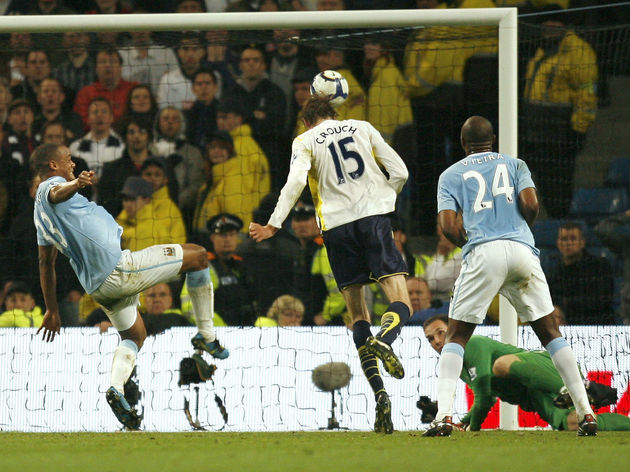 For all the talk of Spurs being bottle-jobs, there can be no denying that they have had the capacity to deliver in big games.

No game has perhaps had more resting on it than the clash between Manchester City and Tottenham in 2010, with the winner being able to all but secure Champions League football at the expense of their opponent.

With nerves clearly impeding both sets of players, it was not until the 82nd minute that podcast legend and all-round nice guy Peter Crouch headed home to clinch a highly sought Champions League spot for the London club. Speaking of Crouch and the Champions League, the big man was again on target as Spurs defeated Milan giants Inter at White Hart Lane in 2010.

Fresh off the back of his virtuoso hat-trick display at San Siro in the away fixture, Gareth Bale was in imperious form, leaving full-back Maicon a shell of the man he had been before encountering the Welshman.

The game ended 3-1 and helped guide Tottenham into the last 16, but it’s the sight of Bale surging past opponent after opponent that makes this game a must watch. Again, another Tottenham vs Chelsea clash that will live long in the memory.

The Blues arrived at White Hart Lane atop the Premier League table, but left having surrendered their advantage to challengers Manchester City.

More importantly, however, the game is more memorable for the stunning emergence of Harry Kane, with the Englishman dominating the game and showing off his impressive finishing prowess.

The current England captain slotted a brace past Thibaut Courtois as well as laying on two other goals as Spurs hit five.

Interestingly, a certain Mohamed Salah came off the bench for Chelsea. Where he is today is anybody’s guess. Something was in the air at Champions League grounds last season.

The knockout stages saw dramatic comebacks like Manchester United defeating Paris Saint-Germain 3-1 away from home, while Liverpool dispatched Barcelona 4-0 to head to the final, but perhaps none were more dramatic than the quarter final second leg at the Etihad.

The game began at lightning speed, with ​City leading 3-2 inside just 21 minutes, before Sergio Aguero extended the lead after half-time. With Spurs facing an exit from the competition, Fernando Llorente stepped up with a contentious hand/arm/shoulder/chest finish to leave City needing a fifth.

When Raheem Sterling netted in added time, all hope was lost, yet – as we are all aware now – VAR had the final say. The scenes of Pep Guardiola’s disbelief will never not be amusing, with the game itself is a true Champions League classic. The thrilling finale to Spurs’ ​Champions League semi final second leg against Ajax capped one of the greatest footballing comebacks of all time.

With the side playing poorly and the Dutch attack looking like scoring with almost every break, the likelihood of reaching the showpiece seemed slim at 3-0 down on aggregate.

However, up stepped diminutive Brazilian Lucas Moura to lead the Tottenham fightback, drawing the game level with two quick-fire goals after half time. Despite a succession of chances at both ends, it was not until the 96th minute that the former PSG man somehow slotted home to fire Mauricio Pochettino’s men to the final.

Such is the irony of football at times, a year of such exciting contests led up to perhaps one of the most drab finals of the recent times, which ​Spurs lost to ​Liverpool.

Milan Transfers: 5 Right Wingers Milan Should Target in the Summer...

​Manchester United Make the Decision to Pay Their Casual Workers Amid...

N'Golo Kanté Denies Being Threatened With a Gun During Agent Financial...