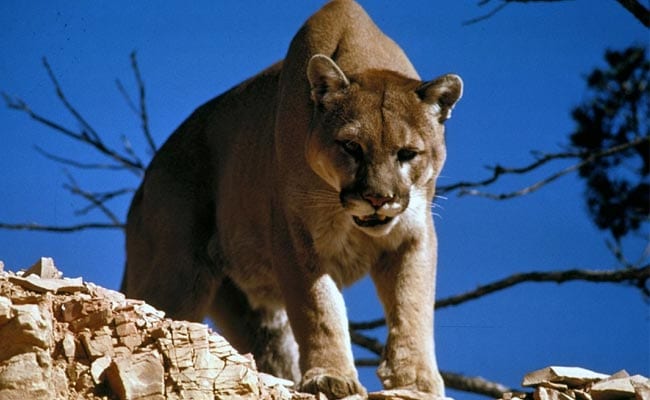 A runner in Colorado fought and killed an 80-pound mountain lion that attacked him on a nature trail in the foothills of the Rocky Mountains, wildlife officials said.

Officials with Colorado Parks and Wildlife said the man was mauled by a “juvenile” mountain lion as he was running Monday on the West Ridge Trail at Horsetooth Mountain Open Space, a 2,700-acre park with hiking and biking trails not far from Fort Collins.

The man, who was not publicly identified, was bitten on his face and wrist but fought free from the lion, killing the animal in self-defense, according to a news release. Officials said Tuesday morning that a necropsy showed that the man suffocated the animal.

“The runner did everything he could to save his life,” Mark Leslie, northeast region manager for Colorado Parks and Wildlife, said later in the statement. “In the event of a lion attack, you need to do anything in your power to fight back just as this gentleman did.”

Officials said that the man stated he heard a noise behind him while he was running Monday afternoon and, when he turned around to see what it was, the lion “lunged” at him, causing serious injuries.

Ty Petersburg, area wildlife manager for Colorado Parks and Wildlife, said in the statement “the lion’s hunting instincts were triggered by the runner,” though, it’s unclear what the runner did to survive. He then got himself to an emergency room, officials said.

A spokeswoman for Colorado Parks and Wildlife did not immediately respond to a request for comment from The Washington Post.

Mountain lions are described as “calm, quiet and elusive” and though attacks are not common in Colorado, their interactions with humans have increased in recent years because more people are moving into their habitat and using trails in those areas, among other things, according to information from Colorado Parks and Wildlife.

In response to reports about aggressive mountain lions, state wildlife authorities trapped and killed three of them last month in Glenwood Springs, about 175 miles southwest of Horsetooth Mountain, according to the Citizen Telegram.

“Most of the attacks were by young lions, perhaps forced out to hunt on their own and not yet living in established areas. Young lions may key in on easy prey, like pets and small children,” the agency said.

Colorado Parks and Wildlife urges people to travel in groups when vising lion country and to never approach a mountain lion in the wild.

If a camper, hiker or runner is confronted by a mountain lion, he or she is advised to “stay calm,” “stop or back away slowly” and “do all you can to appear larger,” such as raising your arms or opening your coat. Never run, crouch down or turn your back on the animal.

“Fight back if a lion attacks you,” the agency noted on its website. “Lions have been driven away by prey that fights back. People have fought back with rocks, sticks, caps or jackets, garden tools and their bare hands successfully. Remain standing or try to get back up!”

After Monday’s attack, Colorado Parks and Wildlife said the agency, along with Larimer County’s department of natural resources, is investigating the incident.