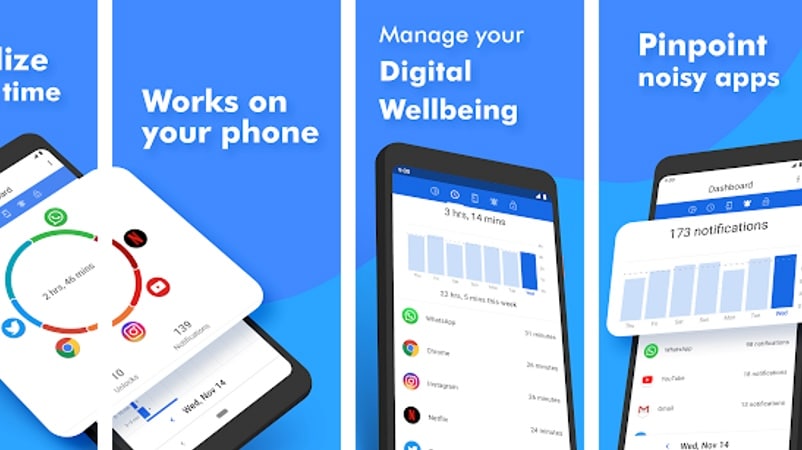 With Android 9 Pie, Google also introduced a great new feature called Digital Wellbeing. This allows users to get insights into how much time they spend on specific apps, their usage of their smartphones, and even set limits to the amount of time in a day they can use specific apps. All of this is meant to make users’ smartphone usage healthier, but unfortunately, Digital Wellbeing is only available for a limited number of devices right now, including the Google Pixel range and some Android One phones.

However, we now have an alternative that works similarly to Google’s Digital Wellbeing, and is compatible with all Android devices running Android Lollipop or later. ActionDash, an app developed by Action Launcher, is now available to download for compatible devices on the Google Play Store. The app offers statistics on which apps you use, how much time you spend on each app and how many times you launch the apps. The timers can be set for weekly, daily and hourly data on your usage, and you can also find out how many times you’ve launched specific apps.

However, ActionDash isn’t quite as feature-filled as Digital Wellbeing in one key way – you can’t set usage timers that impose limits on specific apps. For now, the focus is on offering the user insights and data, and the goal is for users to use that information to self-impose usage limits. However, you can configure the app to give you a daily ‘report’ on your usage and a dark mode, although some of these additional features are available only on the paid version.

While ActionDash is free, a paid version called ActionDash Plus – which costs Rs. 100 – unlocks all of the additional features and functions. However, the key statistics and information are available in the free version itself, so you won’t find yourself wanting for more features even in the base version. There’s also a promise of data privacy, with all of your usage statistics remaining on device and not even shared with the developer.

OnePlus 7 Pro, OnePlus 7T Get Discounts in India as Part...

Facebook Rolling Out a Dedicated Gaming Tab on App