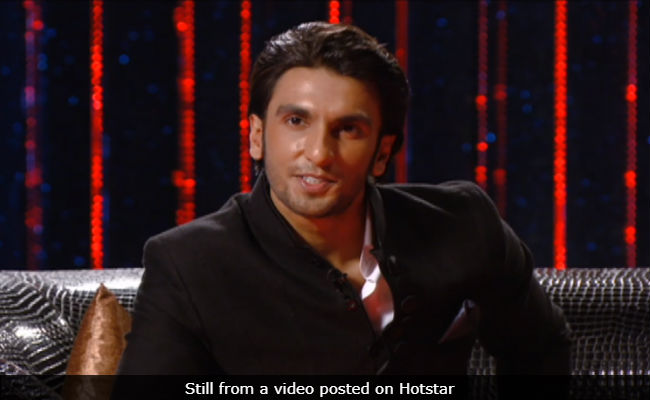 After Hardik Pandya came under fire from the Board of Control for Cricket in India or the BCCI for his sexist remarks on talk show Koffee With Karan, the Internet pulled out an old video of actor Ranveer Singh, currently among the top crop of actors, passing sexist remarks on the same show several years ago. Ranveer Singh, who is basking in the success of Simmba, appeared on the show with his Band Baaja Baaraat co-star Anushka Sharma in 2011 and two snippets from the episode are being shared on social media with words of criticism for Ranveer Singh for his callous comments about Kareena Kapoor and Anushka. “It’s unfortunate that the bar has been set so low for stars and cricketers (cough “Pandya” cough),” wrote a Twitter user. “Still people will glorify them,” added another.

In one of the videos, Anushka Sharma appears to be taken aback by Ranveer Singh’s comment and she also added: “You don’t speak to me like that.” Here are the now viral snippets from the episode which was a part of the third season of Koffee With Karan.

What did Ranveer mean by “I went from child to boy while watching Kareena swim?” pic.twitter.com/muAx3jZujF

“You want your ass pinched? I’m right here” IS THIS YOUR HERO? Also look at how Kjo is laughing. BOLLYWOOD IS FULL OF SCUMS pic.twitter.com/nZbEWiTlp8

Here’s a glimpse of Twitter reaction to the videos:

@RanveerOfficial is another example of #WhyEducationIsImportant just like #HardikPandya. How can you pass such sexist comment and get away ? A human being is known by his morale and values but not by his work or talent. But still people will glorify them. SAD !

It’s sad that Just Bcoz he has some hit films now (courtesy of bhansali)…. Suddenly this loud and unsophisticated person has turned into the new apple of the eye for everyone….. It’s unfortunate that the bar has been set so low for stars and cricketers (cough” pandya” cough)

That look on anushka’s face though. If she could she would have killed him right there.

The look on Anushka’s face ! She clearly didn’t liked what he said and rightly so

Recently, Hardik Pandya was schooled by the Internet for his sexist remarks on Karan Johar’s chat show, for which he issued an apology on Twitter. On Friday, Indian skipper Virat Kohli also distanced himself and the team from Hardik Pandya’s offensive comments. “We as the Indian cricket team and responsible cricketers don’t align with those views, those were individual opinions,” he said in a statement. Meanwhile, Hotstar has pulled the episode down from their website while Star World has removed all the promos from their social media platforms.

Ranveer Singh is currently at the top of his game with two film releases in 2018 – “Padmaavat” and Simmba – and both being box office hits. He’s awaiting the release of Gully Boy and he’ll also star in Kabir Khan’s ’83.