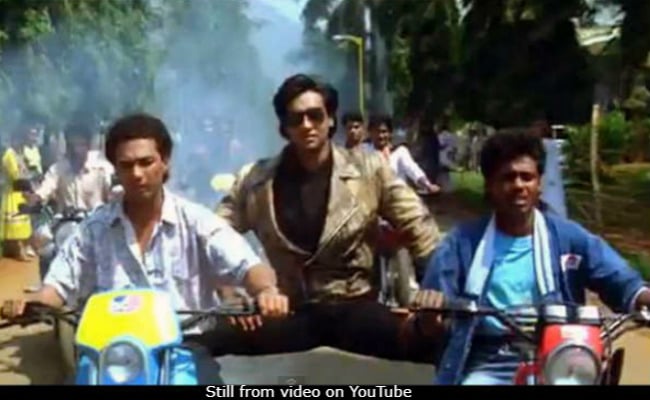 Total Dhamaal co-stars Ajay Devgn and Riteish Deshmukh are on a trolling spree and meanwhile, the Internet is having a great time reading their tweets. Well, looks like it all began with the Singham star’s recent tweet, in which Riteish can be seen photobombing him. “Peechhe daari wala baba kaun hai?” he had tweeted but that was a week ago. On Tuesday, what could be seen a tweet in the garb of not-so-subtle trolling arrived on Riteish’s feed, directly tagging his co-star. “Ajay Devgn, just saw your dog,” he wrote with a hilarious reference to the many car stunts Ajay Devgn is known for.

In response, Ajay Devgn could not resist but allude to his iconic entry in 1991 film Phool Aur Kaante, in which he balances on two bikes. You must remember his split stunt, of course. “Ya, just like how this bird is mine,” tweeted Ajay Devgn. Read the tweets here:

Ya just like how this bird is mine pic.twitter.com/SZRE4Cxzko

This is when Riteish Deshmukh photobombed Ajay:

For the uninitiated, here’s the most well-known stunt performed by Ajay Devgn till date. Bringing you Phool Aur Kaante here.

Ajay Devgn’s action stunts were choreographed by Rohit Shetty in the 1991 film, with which he began his career in Bollywood. At just 17, Rohit Shetty worked as an assistant director for Phool Aur Kaante. Meanwhile, Ajay Devgn has recreated the above mentioned stunt in many of his films that followed, especially in the Golmaal series, also directed by Rohit Shetty.