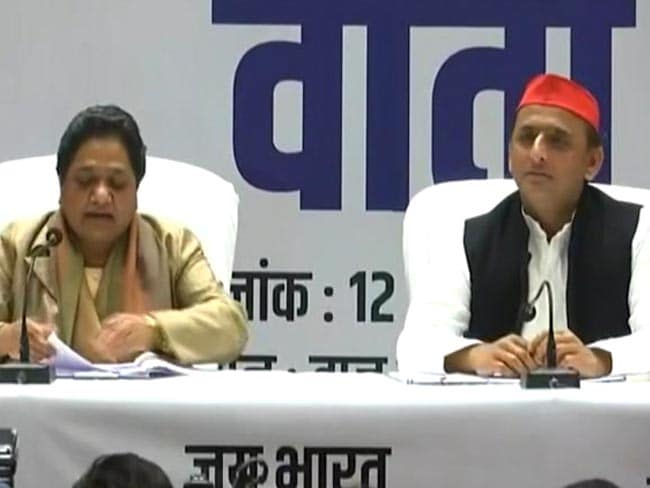 The Congress will not be a part of the alliance, they said, confirming reports that had been building up for weeks.

“It is because of the policies of the Congress that parties like ours came into existence. Whether it is the Congress or the BJP that comes to power, it’s the same thing. There is not much benefit to us from tying up with the Congress,” said Mayawati, shutting the doors on the Congress.

After Samajwadi workers roughed up Mayawati at a guest house in Lucknow, the two parties parted as sworn enemies.

“For the sake of the nation, we decided to rise above the Lucknow guest house incident and again come together,” Mayawati said in a retort aimed at PM Modi, who had scorned her for “forgetting” that episode while allying with the Samajwadi Party.

Akhilesh Yadav added emphatically: “I want to tell all my workers , any insult to Mayawatiji is a personal insult to me.”

Last year, the two parties decided to team up for important by-polls that were prestige battles for the ruling BJP and found that together, they can be unbeaten.

After a successful dry run in three seats, including Yogi Adityanath’s Gorakhpur, the two parties explored taking their alliance to the next level – the 2019 national polls.

“We have defeated the BJP in by-polls by coming together in the last year. The Congress even lost its deposit. This made us realise that of the SP and BSP come together, we can win against the BJP,” Mayawati said.

“This is not an alliance only to win the polls but to also represent the interests of the common people and Dalits, Muslims and other religious minorities,” said the BSP chief.