​USWNT captain Alex Morgan has hit back at critics over the tea drinking celebration after she scored the winning goal against England in the Women’s World Cup semi final earlier this week, revealing the real reason for it and voicing concerns over gender double standards.

Having headed the United States back in front during a tense game in Lyon, Morgan proceeded to mimic drinking a cup of tea that many assumed was a swipe at England and English culture.

Most people were able to laugh it off, but ex-England forward Lianne Sanderson described it as ‘disrespectful’ while working as an analyst for beIN Sports, while the insufferable Piers Morgan bizarrely labelled it ‘bordering on a declaration of war’. In another tweet, the disgraced newspaper editor turned irritating TV host bleated, ‘Come on Lionesses – make these cocky yanks choke on it.’

Indeed, a few others dug way too far looking for meaning and started spouting odd things about the Boston Tea Party of 1773. Now, Morgan (Alex) is an intelligent, articulate and well-rounded individual, but it hardly seemed that in the heat of a World Cup semi-final she was thinking about making a political statement about something that happened 246 years ago.

And, y’know, as it turns out, she wasn’t. And it had nothing to do with England at all.

“My celebration was actually more about ‘that’s the tea’ – telling a story, spreading news. Sophie Turner does it quite often, she’s one of my favourite actresses,” Morgan said, via BBC Sport.

“It wasn’t a hit to England anyway,” she added.

Perhaps more importantly, Morgan raised the issue of double standards in sport when it comes to men and women celebrating their success.

“I feel that there is some sort of double standards for females in sports to feel like we have to be humble in our success,” Morgan explained.

“We have to celebrate but not too much, we have to do something, but it always has to be in a limited fashion. You see men celebrating all around the world in big tournaments, grabbing their crotch or whatever.” 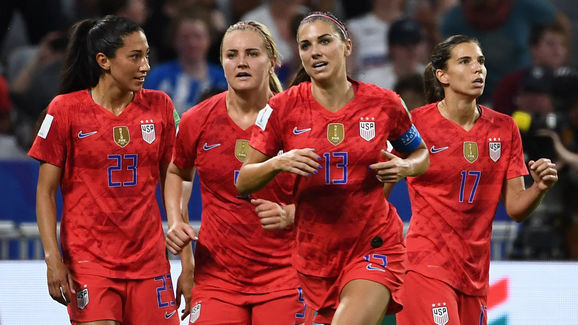 Morgan and her USWNT colleagues were criticised early in the tournament for the perceived ‘over-celebration’ of goals in the 13-0 rout of Thailand, particularly those scored late on.

Amitabh Bachchan shocked as his blog considered 'objectionable', shares it on...