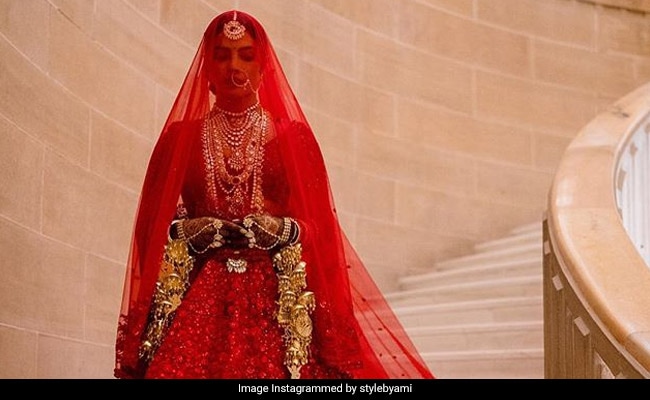 It’s 2019 already but the Internet still can’t stop obsessing over the fabulous details about Priyanka Chopra and Nick Jonas’ wedding. Like only recently, jewellery designer Mrinalini Chandra shared stunning details about the 36-year-old actress’ wedding kalire and the big fat wedding of Priyanka and Nick found a spot on the trends’ list again. “God is in the details. The most incredible first time we could have asked for!” wrote Ms Chandra, who also shared a close-up shot of Priyanka’s custom-made kalire and added that this is the first time that they retold a love story through “amazing details” on their kalire designs.

A closer look at Priyanka Chopra’s kalire would reveal that the actress had significant designs, such “a symbol from Greece, where Nick proposed to her to cupid, to a cross and the trishul from both their religions” (as mentioned by Ms Chandra in her Instagram post), engraved on separate elements of her kalire. Priyanka’s kalire also had “an engraved silhouette of both of them” and also the character Mr Chip Potts from “the couple’s favourite character from The Beauty And The Beast.” Nick Jonas once played the character of Mr Chip Potts in the broadway production.

Priyanka Chopra and Nick Jonas wore stunning prices from Sabyasachi couture on the day of their Hindu wedding on December 2, which was preceded by a Christian wedding ceremony on December 1.

For the Christian wedding, Priyanka opted for a Ralph Lauren wedding gown and had Nick Jonas’ full name, the mantra “Om namah shivaay” and words such as “love” and “compassion” sewn on the jacket. “Fifteen artisans in Mumbai, India, hand-embroidered the coat with a variety of complex techniques, from fine cording to tulle appliques and pastiche threadwork inspired by Chantilly lace, for a total of 1,826 hours,” read a post on Ralph Lauren’s Instagram.

Priyanka Chopra and Nick Jonas had a destination wedding in Jodhpur’s Umaid Bhawan Palace in December after which they hosted three wedding receptions in India – one in New Delhi, followed by two in Mumbai.