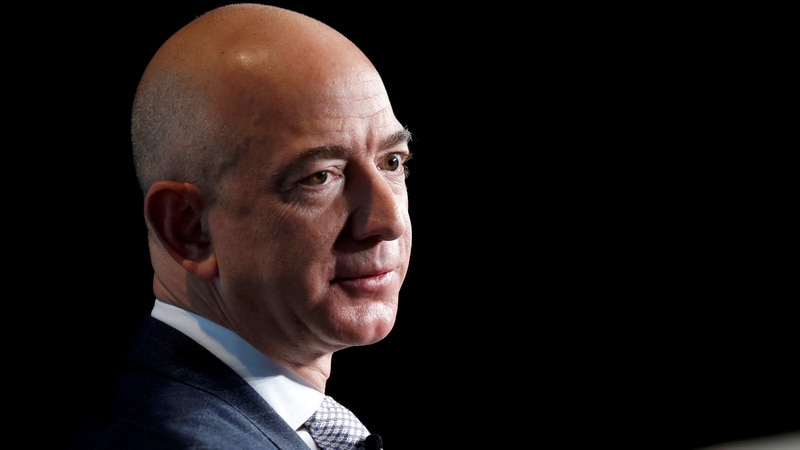 Amazon chief executive Jeff Bezos said Thursday that he was the target of an extortion and blackmail effort by the National Enquirer, which he accused of threatening to publish intimate pictures of him unless he backed off an investigation of the tabloid.

In an extraordinary post to the online publishing platform Medium, Bezos said the Enquirer and its parent company, American Media, made the threat after he began investigating how the tabloid obtained text messages that revealed his relationship with former TV anchor Lauren Sanchez.

Bezos, who owns The Washington Post, wrote that the Enquirer wanted him to make a false public statement that he and his security consultant, Gavin de Becker, “have no knowledge or basis for suggesting that AMI’s coverage was politically motivated or influenced by political forces.”

Bezos declined to do so.

Instead, he published what he said were emails from Enquirer executives to a lawyer representing de Becker. In one, top Enquirer editor Dylan Howard appears to suggest that the tabloid would publish a series of photos of Bezos and of Sanchez, some of them salicious, if AMI’s terms weren’t met.

“I wanted to describe to you the photos obtained during our newsgathering,” Howard wrote, going on to say that the Enquirer had a “below the belt selfie” of Bezos, among other shots. Howard added, “It would give no editor pleasure to send this email. I hope common sense can prevail – and quickly.”

Bezos noted that the email “got my attention,” but said that “any personal embarrassment AMI could cause me takes a back seat because there’s a much more important matter involved here. If in my position I can’t stand up to this kind of extortion, how many people can?”

The post, which was linked from Bezos’ Twitter account, was a remarkable escalation of a spat between the world’s richest man and a tabloid known for its loyalty to the president of the United States.

The story spilled into public on January 9 when Bezos and his wife, MacKenzie, revealed they would be divorcing after 25 years of marriage – roughly two days after the Enquirer had informed him it would be publishing a story about his relationship with Sanchez. The Enquirer later published what it called “sleazy text messages and gushing love notes” between Bezos and Sanchez, raising questions about how the tabloid was able to get such intimate material. Bezos began to investigate how the leak of his private information came about.

AMI’s chief executive, David Pecker, has had a long friendship with President Donald Trump, who has repeatedly attacked Bezos, Amazon and The Washington Post. Pecker directed the Enquirer to write favourable stories about Trump during the 2016 presidential campaign, while paying $150,000 to former Playboy model Karen McDougal to suppress her claim of a long-running affair with Trump.

On January 31, de Becker was quoted in the Daily Beast suggesting that the Enquirer’s pursuit of Bezos was politically motivated.

On February 5, The Post reported that Bezos and de Becker suspected that the source of the text and photo leaks may have been Sanchez’s brother, Michael, a California public relations executive who is close to Pecker and various figures in Trump’s orbit, including former campaign advisers Roger Stone and Carter Page. Michael Sanches denied any involvement in revealing his sister’s relationship with Bezos.

The Post reported that Sanchez said he was told by multiple people at AMI that the Enquirer set out to do “a takedown to make Trump happy.”

Pecker is now cooperating with federal investigators who are looking into the company’s involvement with the Trump campaign.

Bezos’ public letter seems to suggest that federal agents should investigate whether AMI may have violated the terms of its non-prosecution agreement with prosecutors in Manhattan over its role in the 2016 hush money payments.

“Rather than capitulate to extortion and blackmail, I’ve decided to publish exactly what they sent me, despite the personal cost and embarrassment they threaten,” Bezos wrote. In the next sentence, Bezos describes the non-prosecution agreement struck in September between AMI and the Justice Department.

A spokesman for the US attorney’s office in Manhattan did not immediately comment on Bezos’ assertion that AMI had committed extortion.

Robert Mintz, a former federal prosecutor now in private practice, said Bezos’ allegations, if accurate, could have serious consequences for both prosecutors and AMI.

“This could constitute criminal conduct in the eyes of a prosecutor, if these allegations are true,” said Mintz. “For prosecutors, your worst nightmare is watching a cooperation deal unravel. Alleged conduct like this puts them in the position to rethink that deal and potentially turn around and have to prosecute AMI, and that undermines their ability to continue to use them to assist other ongoing investigations.”

Representatives of AMI had no immediate comment on Thursday.

Bezos said in his Medium post that the tabloid threatened to keep the photos on hand and publish them in the future “if we ever deviate from [the] lie” that politics played no role in the Enquirer’s pursuit of Bezos’ relationship with Lauren Sanchez.

In addition, he included emails from AMI’s deputy general counsel, Jon Fine, detailing a list of terms under which AMI said it would withhold publication of the photos. One of those terms was a statement from Bezos and de Becker “affirming that they have no knowledge or basis for suggesting that [AMI’s] coverage was politically motivated or influenced by political forces.”

In his post on Medium, Bezos called his ownership of The Post “a complexifier” for him. He wrote that it’s “unavoidable that certain powerful people who experience Washington Post news coverage will wrongly conclude I am their enemy. President Trump is one of those people, obvious by his many tweets. Also, The Post’s essential and unrelenting coverage of the murder of its columnist Jamal Khashoggi is undoubtedly unpopular in certain circles.”

Despite mounting evidence, Trump has disputed that Khashoggi was killed on the orders of Saudi Arabia’s de facto ruler, Mohammed bin Salman. The Saudi crown prince was the subject of a flattering glossy magazine produced by AMI in 2016, at a time when the Saudi regime was attempting to portray Mohammed as a reformer in Middle Eastern politics.

It’s not clear how the Enquirer acquired the texts between Bezos and Sanchez. Bezos commissioned de Becker – his longtime security consultant – to investigate how the material fell into the Enquirer’s hands.

The Enquirer has said that it obtained the texts and photos lawfully, and that it had the right to publish the material under the “fair use” doctrine of copyright law. It also said the photos were newsworthy, given Bezos’ prominence.

But as Bezos began to investigate the leak, the tabloid’s parent disputed any suggestion that its story was politically motivated. The company “emphatically rejects any assertion that its reporting was instigated, dictated or influenced in any manner by external forces, political or otherwise,” Fine wrote in an email to de Becker’s lawyer, Martin Singer, which Bezos shared. “Simply put, this was and is a news story.”

Ted Boutrous, a veteran lawyer who briefly represented McDougal in a dispute with the Enquirer, said the emails Bezos described in his post are “a textbook example of blackmail and extortion. It’s ripped right out of the law books.”

He added, “At an extreme level, this shows how frightening it should be to the citizens of the United States that the National Enquirer reportedly has a safe full of information about the president of the United States. That’s one of the dangers to democracy of what they were engaged in when they were catching and killing information they could have used against Candidate Trump and now President Trump. . . . It’s a shocking and frightening thing Mr. Bezos has revealed.”