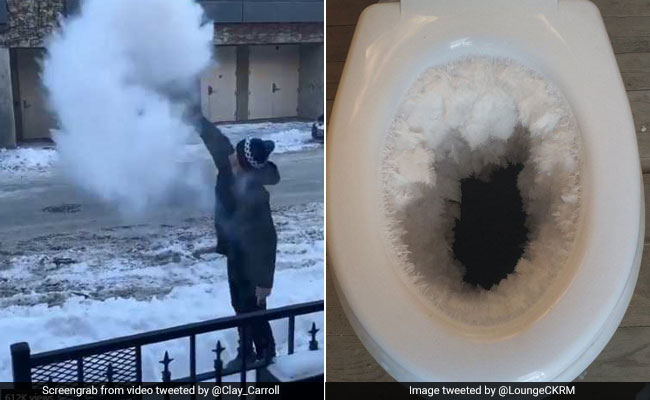 A torrent of polar air brought record-low temperatures to much of the American Midwest on Wednesday. The bitter cold is being caused by a displacement of the polar vortex, a stream of air that normally spins around the stratosphere over the North Pole, but whose current was disrupted. But how cold is it exactly? Well, temperatures are reaching minus 29 degrees Celsius in certain parts of the Midwest, making it colder than the South Pole.

On social media, many have taken to answering the question of how cold it is exactly with the help of examples. From ice forming inside houses to hair freezing in air, their posts will make you shiver even as you read them.

Take a look below:

It’s so cold that this Iowa woman’s hair literally froze mid-air. Her video has now collected over 1.67 million views. “Is Iowa really THAT cold?” Taylor Scallon captioned the clip.

“Is Iowa really THAT cold?” pic.twitter.com/htxSZzy2QB

It’s so cold that everything is freezing, frozen, frigid. This toilet seat is a prime example.

It’s soooo cold! how cold is it? it’s sooo cold that this is happening! pic.twitter.com/uloTK26BJA

It’s so, so cold that even boiling water stands no chance. Videos going viral show boiling water freezing mid-air before it can even hit the ground.

Boiling water freezes before it hits the ground. -22/-49 windchill in Chicago. #Chicago#Jaden#chiberiapic.twitter.com/UPYVjloGBk

Freezing of a soap bubble#PolarVortexpic.twitter.com/AvqaCdYhhU

It’s so cold that Chicago is setting its train tracks on fire to keep them operational.

Chicago putting RAILSon FIRE
It’s that cold out there #chicago#omnidigit#train#fire@omnidigitpic.twitter.com/vKLI2vuyDL

And while the temperatures may be dropping, it hasn’t affected people’s sense of humour.

It’s so cold outside that I saw a politician with his hands in his own pocket!

How cold is it in Minnesota. It’s so cold that even the Jaguars are putting on sweaters. #mymorning@Matt_Brickmanpic.twitter.com/LPVHhnQNVa

It has been more than 20 years since a similar arctic blast covered the Midwest and Northeast, weather services say.