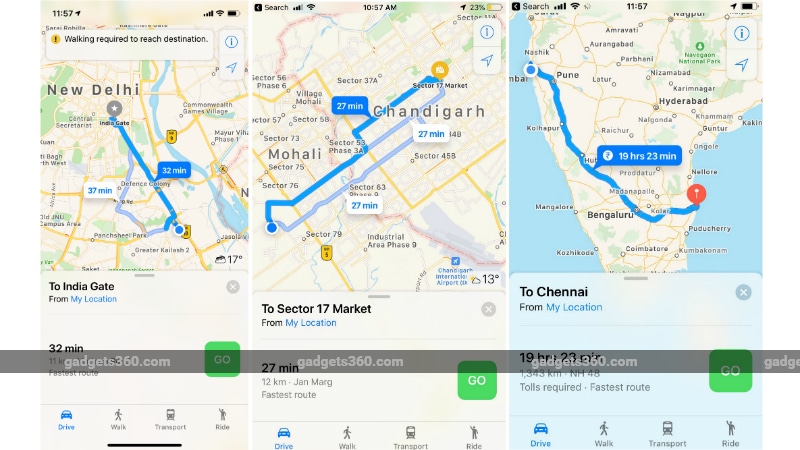 Apple Maps, the native mapping app by Apple, has kicked off the highly anticipated turn-by-turn navigation in India. The feature lets you navigate from one place to another. You can also switch between the Drive and Walk modes on the Apple Maps app. Similarly, Apple has provided the Transport and Ride options to let you easily reach your destination. The app also provides you with metrics such as an ETA (estimated time of arrival) and the total distance between your current location and your destination. Similarly, you can check all the available routes to your destination. All this makes the competition tougher for Google Maps is the most popular choice among Indian users so far.

To get started with the turn-by-turn navigation on Apple Maps, enter your destination in the search bar and then tap the Directions button. The button notably shows you the ETA. Once tapped, the Apple Maps app will provide you with Drive, Walk, Transport, and Ride options. You can pick either Drive or Walk to enable the turn-by-turn navigation and then hit the Go button.

By default, Apple Maps provide you with the fastest route. You can, however, look for alternatives by swiping up on the ETA screen.

Once you start the navigation by tapping the Go button, Apple Maps will provide you with a Route Card that shows you the ETA as well as the estimated time and total distance to your destination. By default, the Maps app provides a Guidance Voice. There is an option to mute the voice or adjust its volume by tapping the Audio button from the Route Card.

At any time, you can also tap the Details option from the Route Card to view turn-by-turn directions. Apple generally offers options such as Gas Stations, Lunch, and Coffee on the Route Card in the US. However, these options are yet to make way to India.

Apple has confirmed to Gadgets 360 that Maps turn-by-turn navigation has indeed rolled out in India, across major cities in the country.

Up until now, Apple Maps wasn’t a useful preloaded app for iOS users in India. This has so far pushed a large number of iPhone and iPad users to use Google Maps on their devices over Apple’s native solution. The Cupertino giant, however, last year announced that it started rebuilding its mapping app from the group up with its own dataset. The company also has Amsterdam-based TomTom as a data provider.

Why It&rsquo;s a Bad Idea to Buy TVs Without Seeing Them...