AirPower wireless charging mat is set to debut later this year, according to a report citing supply chain sources. Apple unveiled the AirPower mat back in September 2017 and was planned to bring it to the market last year. However, the company has so far maintained silence on its plans towards launching the unified wireless charging solution. The new report corroborates what analyst Ming-Chi Kuo predicted in October last year. Recently, it was also reported that manufacturer Luxshare Precision has started the production of AirPower, though the exact launch date is yet to be announced.

Citing supply chain sources, Digitimes reports that components orders for Apple’s AirPower continue to pull in and it will become available later this year. It is said that Taipei-based Lite-On Semiconductor has been shipping components, particularly the glass passivated package (GPP) bridge rectifier, for over a year.

Apple was originally set to bring the AirPower wireless charging mat to the market in 2018, though it missed the schedule – without giving any clarification. However, the Digitimes’ report suggests that the device is one of the ongoing developments by the Cupertino company.

Separately, 9to5Mac notes that Apple still maintains a reference to the AirPower mat as well as its missed 2018 launch on the Apple Store page, seen in an obscure corner – the refurbished Apple Watch Series 3 tech specs. 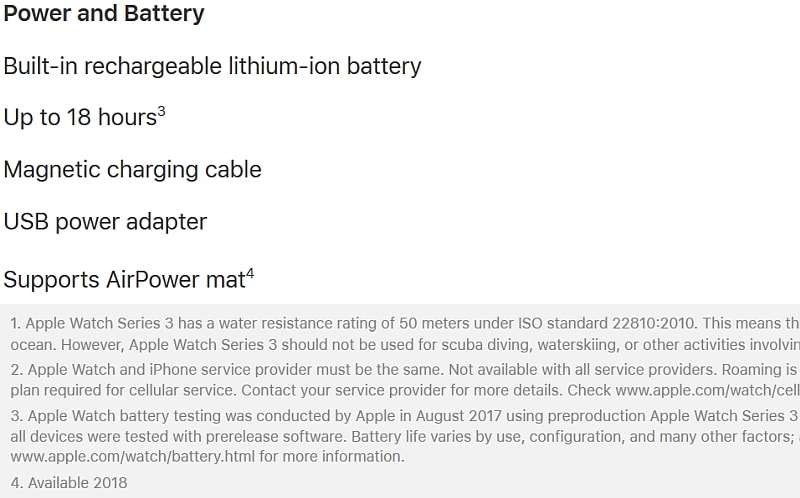 Back in October last year, analyst Kuo predicted in a letter to investors that Apple would launch the AirPower as late as the first quarter of this year.

One of the reasons behind the anticipation of the AirPower mat is its ability to charge not just a compatible iPhone model but also the Apple Watch and AirPods simultaneously. Some initial reports alleged that the company delayed the launch of its new device due to some overheating and interference issues.

That being said, considering the latest buzz around the AirPower launch, Apple has resolved all the major issues with the wireless charging mat and is set to bring it to the masses sometime in the coming future.