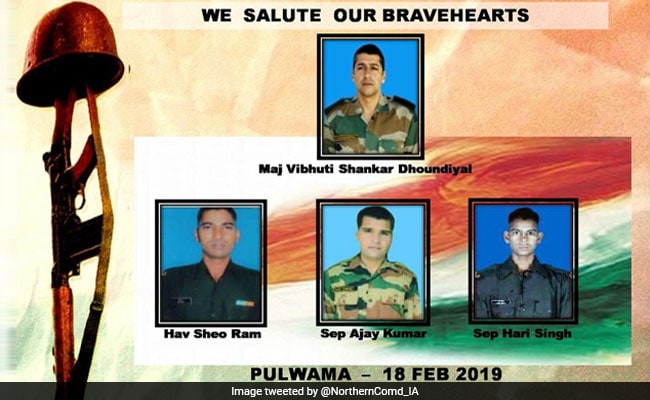 Uttarakhand had barely laid to rest one of its braves who died on the Line of Control over the weekend, when it received the news of another’s death. The last rites of Major Chitresh Bisht were still underway in Haridwar today, when the army said that Major Vibhuti Dhoundiyal had died in an encounter with terrorists in Jammu and Kashmir’s Pulwama. The officer, killed days after a terror attack left over 40 security personnel dead in the same district, was just 34 years old.

Major Dhoundiyal, a resident of Dehradun, is survived by his wife Nikita Kaul.

He was among four army men killed in an encounter with Jaish-e-Mohammad terrorists in Pulwama just a short distance away from the spot where over 40 Central Reserve Police Force (CRPF) troopers were killed last week in a suicide attack by the Pakistan-based terrorist group.

Major Chitresh Bisht was killed on Saturday while defusing a mine on the Line of Control in Nowshera sector of Rajouri district on Saturday. He was cremated in Haridwar on Monday afternoon.

#ArmyCdrNC and all ranks salute the supreme sacrifice of our brave officer and soldiers & offer deepest condolences to the families. @adgpi@PIB_India@SpokespersonMoDpic.twitter.com/qo8TzBJF89

Sepoy Hari Singh, from Rajgarh in the Rewari district of Haryana, is survived by his wife Radha Bai.

Sepoy Ajay Kumar, from Bastikri in Uttar Pradesh’s Meerut, is survived by his wife, Priyanka.

Havaldar Sheo Ram, from the Tiba village in Rajasthan’s Jhunjhunu, is survived by Sunita Devi.

Though it came at a high price, the operation was seen as a big success as one of the three terrorists killed in the encounter was a close aide of Jaish-e-Mohammad chief Maulana Masood Azhar. Kamran is believed to be the mastermind of Thursday’s Pulwama attack, the deadliest terror strike in recent times.