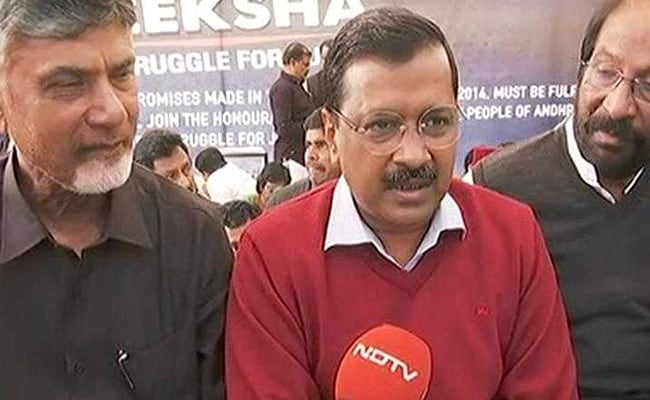 Aam Aadmi Party chief Arvind Kejriwal on Monday launched a piercing attack on Prime Minister Narendra Modi, saying the way he treated state governments, he looked like the “prime minister of Pakistan”. He was referring to the recent standoff between West Bengal Chief Minister Mamata Banerjee and the centre over the CBI reaching the house of Kolkata police chief Rajeev Kumar to quiz him in ponzi scams.

Arvind Kejriwal alleged that PM Modi had the Anti-Corruption Branch of the Delhi government seized by paramilitary forces.

“Now he sent 40 CBI officers to arrest Kolkata’s Police Commissioner to send a message to the police and bureaucracy in all states that they should not be loyal to state governments but to the centre,” he alleged.

After the CBI officers reached Mr Kumar’s house last week, police officials whisked them away and temporarily detained them. Upset with the agency’s action, Ms Banerjee sat on a protest that continued for three days. A number of opposition leaders rallied behind Ms Banerjee, alleging the centre was targetting state governments by using investigative agencies.

“It is unfortunate that the Chief Minister and thousands of people from Andhra have to demonstrate here for special status for the state. This poses a big question on the country’s federal structure,” Arvind Kejriwal said.

“The PM at least thrice publicly declared he would give special status to Andhra. He is world famous for lying. Whatever he says, he never fulfills. Even (BJP chief) Amit Shah says that whatever they say is nothing but ‘jumla’ (fake promise),” he said.

N Chandrababu Naidu’s party had been a constituent of the National Democratic Alliance — a group of parties led by the BJP. However, the party quit the alliance over denial of special status to the state.

At his protest, Mr Naidu referred to the famous “Raj Dharma” quote made by  former Prime Minister Atal Bihari Vajpayee to remind then Gujarat Chief Minister Narendra Modi of his duty during the 2002 Gujarat riots.

“(Former PM) Atal Bihari Vajpayee said ”Raj Dharma’‘ was not followed in Gujarat (during the 2002 riots). Now, “Raj Dharma” is not being followed in the case of Andhra Pradesh. We have been denied what is rightfully ours. If you don’t get it done, we know how to get it done,” the 68-year-old Chief Minister said.