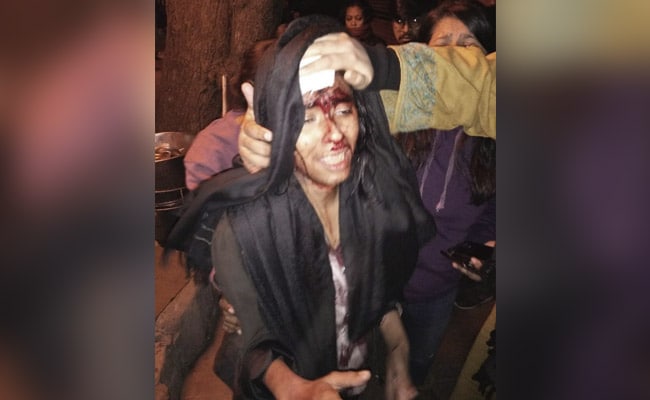 More than 30 students and teachers were injured in Sunday’s mob attack at JNU.

Jawaharlal Nehru University (JNU) students’ union president Aishe Ghosh was named in two police cases filed in a span of four minutes on Sunday evening, shortly after she was taken to hospital bleeding from a brutal attack by a masked mob. That is when the university filed complaints against the student chief and others, the police said on Monday as details of three First Information Reports emerged.

There are no names in the third FIR, filed on the mob that barged into the campus and attacked students and teachers with sledgehammers and iron rods.

The two cases against Aishe Ghosh and other JNU students were filed at 8.39 pm and at 8.43 pm on Sunday, when the mob was still on campus, beating students and teachers and vandalizing hostels.

“There was an attempt to murder me but the Vice Chancellor didn’t even bother to find out how we were. It is so sad…I used to consider JNU my second home,” Aishe Ghosh told NDTV.

Aishe and 26 other students have been charged with vandalising the server room of the university twice, on January 1 and 4, and attacking security guards during the registration of students for the winter semester.

The JNU students’ union has been protesting against a hostel fee hike and had allegedly stormed into the server room to block the registration process on Sunday afternoon. There were clashes between the JNU students and the ABVP at the time.

The FIR against Aishe Ghosh says: “…since the entire registration process was halted due to the lockdown on the CIS (communication and information) office, an effort was made by the CIS staff with the help of JNU security guards to open the office at 6am in the morning of 4th Jan 2020. At this time (Aishe Ghosh, Saket Moon) indulged in physical violence, pushed the lady guards, verbally abused them and threatened them with dire consequences if they would open the lock of the CIS office.”

The university had complained that the students “illegally trespassed the university property with the criminal intention to damage the public property. They damaged servers and made it dysfunctional. They also damaged fiber optic power supplies and broke the biometric systems inside the room.”

The masked attackers, however, are yet to be identified or named by the police, who are accused of letting them slip out of the JNU campus after a three-hour rampage. Though JNU students have accused the Akhil Bhartiya Vidyarthi Parishad (ABVP) of involvement in the attack in their complaints to the police, and some faces can be identified from security camera footage, the FIR names no individual or organization.