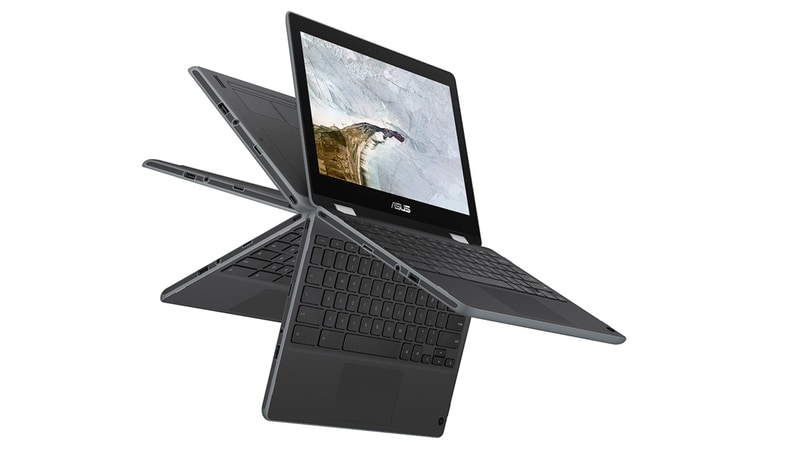 Asus has unveiled four new Chrome OS machines just before CES 2019 kicks off. The new devices are a part of Asus’ new Chromebook Education series laptops that feature a rugged and classroom-ready design. The four devices include the company’s first Chrome OS-based tablet, two 11.6-inch convertible Chromebooks, and a 14-inch Chromebook. The lightweight Chromebooks are suited for educational use. Asus claims these new devices will be available in the coming months and pricing will be announced at launch.

In its announcement, Asus said its new Chromebook Education series devices are durable and feature spill-resistant keyboards. The devices also come with rubber bumpers that can help them withstand the usual everyday wear-and-tear at schools.

Here are all the four Chromebooks Asus has unveiled ahead of CES 2019 so far:

The Chromebook C204 is powered by an Intel Celeron N4000 CPU, supported by 4GB of RAM. It comes with two USB Type-A 3.1 ports and two USB Type-C ports. The 50WHr battery is expected to last an entire day, depending on the usage pattern.

The Chromebook Flip C214 is powered by an Intel Celeron N4000 processor, supported by up to 8GB of RAM. It features two USB Type-C ports and just one USB 3.1 port.

Asus Chromebook C403
The Chromebook C403 is a 14-inch laptop that Asus promises can be easily carried in any regular school backpack. The laptop features a rugged design and a keyboard that can handle the usual spills. It is powered by the Intel Celeron N3350 processor and comes with up to 4GB of RAM and 32GB of storage. There are two USB Type-C ports and a single USB Type-A 3.1 port.