Budget laptops for everyday or casual use are abundantly available in the market, but finding one that doesn’t sacrifice a lot to fit a low budget can be a tricky affair. Asus is targeting cost-conscious buyers with its recently launched VivoBook 15 (X505Z).

The Asus VivoBook 15 (X505Z) is based on AMD’s first-generation Ryzen mobile platform and checks most of the main boxes as far as core components go. To top it off, it’s also relatively thin and light for a 15.6-inch laptop, and you get all this for a price of Rs. 35,990. Let’s see if it actually performs as well as it looks on paper.

The VivoBook 15 (X505Z) is built to fit a low budget but you wouldn’t think that by looking at it. We think Asus has done a good job with the styling, and even though the body is built mostly of plastic, the brushed metal design on the lid and palm-rest area, coupled with the dual-tone colour scheme, helps this model stand out.

The hinges don’t allow the lid to be pushed all the way back to 180 degrees but you can get a wide enough angle for most typing positions. The two hinges hold the lid in place well enough at any angle, although it does wobble easily if you move about. The slim borders on three sides of the display give the VivoBook 15 (X505Z) a modern look, and this also helps shrinks the overall footprint of the laptop a bit, compared to most 15.6-inch models. 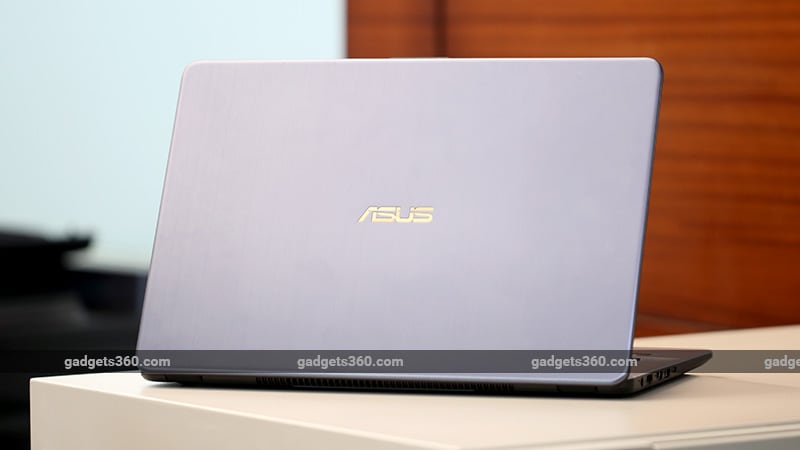 The VivoBook 15 X505Z is fairly slim at 18.9mm in thickness, and weighs around 1.6kg, so it’s not too bulky to carry around on a daily basis. Despite the slim profile, Asus has fitted full-sized ports on either side. You get two USB 2.0 and one USB 3.0 (both Type-A), a USB Type-C 3.1 (Gen1) port, HDMI, a headphone and microphone combo port, Gigabit Ethernet, and a full-sized SD card slot.

The palm-rest area is spacious enough for even the largest hands, which is good. There isn’t much flex in the keyboard and palm-rest area as the entire panel is a single piece of plastic, but the keys themselves felt dull and spongy to us. Key travel is decent but we needed to really mash certain keys harder than usual for them to register input. As a result, we ended up having quite a few typos when writing this review. There’s no backlighting for the keys, and no number pad either. The trackpad is spacious and works well with Windows gestures.

There are a few vents on the bottom of the laptop and some near the hinge, for air circulation. The 15.6-inch display has an anti-glare finish and sports a full-HD resolution, which is good to see considering the laptop’s price and other specifications. However, the quality of the panel is below average. Viewing angles are quite poor, which means there’s only a very narrow range of angles at which the colours and brightness look balanced. Viewing the display at anything beyond this results in warped colours and a hazy image. Whites are also blown out at higher brightness levels, making it difficult to read fine text.

In the box, the Asus VivoBook 15 (X505Z) ships with a couple of manuals and a small, square-shaped 45W power adapter. 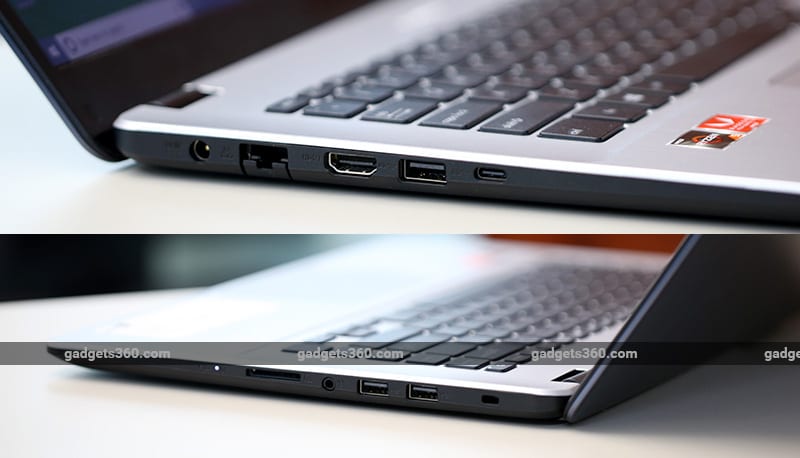 The Asus VivoBook 15 (X505Z) has a good selection of ports, including a USB Type-C port

The VivoBook 15 (X505Z) runs on AMD’s first-generation Ryzen mobile CPUs. You can choose between a Ryzen 3 2200U and a Ryzen 5 2500U, and we have the Ryzen 5 model on test. This is a multi-threaded quad-core CPU with a base clock speed of 2GHz and the ability to turbo up to 3.6GHz. It also has a Radeon Vega 8 mobile graphics chip built in.

The rest of the VivoBook 15 (X505Z)’s specifications are the same, no matter which CPU you go with. These include 8GB of DDR4 RAM, which is soldered onto the motherboard, and a 1TB mechanical hard drive (5400rpm). There is a free RAM slot available which lets you upgrade this model to up to 16GB. However, there’s no quick-release hatch of any kind on the bottom so you’ll have to unscrew the entire base to access the RAM and hard drive.

Wireless connectivity includes Wi-Fi 802.11ac with 2×2 MIMO antennas, and Bluetooth 4.2. The laptop has a VGA webcam, which is quite disappointing as the quality is very poor. Even in a well-lit room, the image looks blurry and grainy. The laptop runs on Windows 10 Home 64-bit, and with it, you get some preinstalled Asus apps for battery management, audio and video setup, and keeping the drivers up to date.

The VivoBook 15 (X505Z) is not the speediest laptop, and this is mostly due to the hard drive. The 1TB Toshiba hard drive isn’t very quick, and this shows in benchmarks such as SiSoft Sandra’s File System test. The laptop returned a sequential read bandwidth of 106.4MB/s, random read bandwidth of 57.1MB/s and sequential read and write bandwidth of around 83MB/s. This is not unheard of for laptop drives at this price point, but even a small amount of flash storage would have helped speed things up a lot.

This sluggishness is noticeable at times with general Windows 10 usage, or when trying to load any app or game. Basic productivity and social apps such as Slack, Twitter, Chrome, etc run fine, but trying to multitask isn’t easy as the system gets a bit unresponsive for brief moments every now and then.

AMD’s Ryzen 5 2500U CPU is more or less similar to Intel’s Core i5-8250U CPU in most of the synthetic benchmarks we ran. When compared to something like the Asus ZenBook 13 (UX331) which uses that very Intel CPU, we got similar scores of 138 and 149 respectively in Cinebench R15’s single-core CPU test. In the same benchmark, the multi-core test seemed to favor the Ryzen 5 2500U, returning a slightly higher score of 629 points compared to 510 for the Core i5-8250U.

On the other hand, the OpenGL graphics test saw a dip in framerate at 37.8fps for the integrated Radeon Vega 8 GPU, compared to 52fps with Intel’s UHD Graphics 620 GPU. 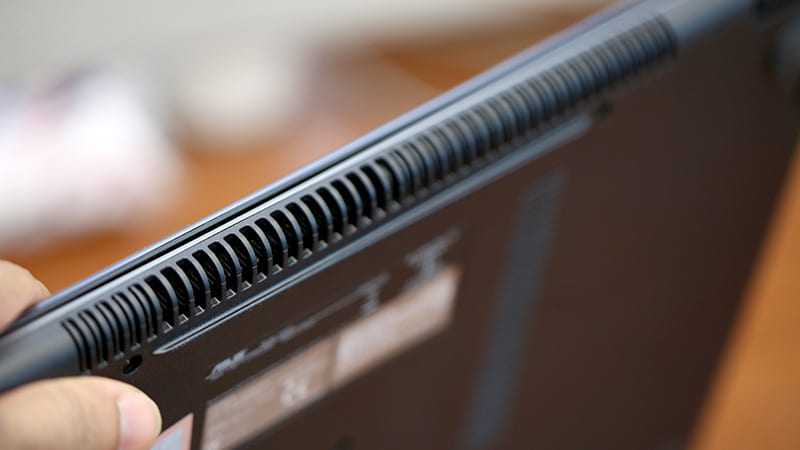 Coming to other synthetic benchmarks, we got a PCMark 10 score of 2615 points and a 3DMark FireStrike graphics score of 1504 points with the VivoBook 15 (X505Z). However, in real-world tests such as file compression, 3D rendering and video encoding, the VivoBook struggled to keep up. Zipping a 3.2GB folder of assorted files with 7zip took 7 minutes and 40 seconds, while encoding a 1.36GB AVI video file to MKV using Handbrake took about 2 minutes and 30 seconds.

Gaming is possible (to an extent) on the VivoBook 15 (X505Z) provided you dial the graphics settings down in heavier titles. In Rise of The Tomb Raider, we got an average framerate of 14.1fps using the ‘Low’ preset at native resolution. We had to drop the resolution in order to get a more playable framerate. Doom was unplayable even at 1280×720 and the ‘Low’ preset, as we averaged around 17-18fps.

The narrow borders around the display make all kinds of content quite immersive but the low quality of the panel prevented us from truly enjoying our media. The average colour reproduction and narrow viewing angles made even lively, animated videos look a bit dull. You get Asus’ Splendid utility for tweaking colour profiles, but it didn’t help much. The stereo speakers were also strictly average. They don’t get very loud and sound a bit muffled.

The 3-cell, 42WHr battery managed to run for 1 hour and 35 minutes in our Battery Eater Pro benchmark. This is not bad, and was in line with our expectations from the given battery capacity. With actual use though, which mostly involved working on Google Docs and some intermittent music and video playback, we managed to squeeze just about 4-4.5 hours of runtime out of a full charge. This isn’t great, as the laptop won’t last you even an entire workday on a single charge.

Verdict
We have to hand it to Asus for pricing the VivoBook 15 (X505Z) this aggressively. At Rs. 35,990, it’s tough to find anything that matches the model we have in terms of specifications. The closest one that we could find, with Windows included, is the Acer Aspire 5 (A515-51) but it has 4GB of RAM and a lower resolution display for a bit more money. The VivoBook 15 (X505Z) launched in December with a 1-month exclusive tie-up with Paytm Mall, and even today, that’s the only place that seems to have all the variants listed.

If you’re planning on picking this laptop up, there are some things to keep in mind. App loading times and multitasking aren’t the quickest due to the slow hard drive. The display is relatively sharp, but colours and viewing angles are weak. The keyboard is also too mushy for our liking, the webcam is below average, and the battery won’t last you an entire workday.

However, for the price, you get a decently powerful CPU, plenty of storage, Windows 10 preinstalled, and a good set of ports. All of this makes the VivoBook 15 (X505Z) still worth considering for casual use.