In front of a packed crowd at the San Mames neither side carved open any meaningful opportunities in the first ten minutes, as Bilbao were happy to sit off the visitors and look to hit Barcelona on the break. The first chance of the game came from just such an instance as Arturo Vidal gave away possession in midfield to Yuri Berchiche, who surged forward and fired a low shot across goal and wide.

Ter Stegen then produced a moment of magic to keep the sides level on 16 minutes, tipping Markel Susaeta’s curling left footed effort over the bar with an excellent diving stop.

La Blaugrana offered a timely reminder of their attacking threat moments later, however, as ​Luis Suarez was just inches away from connecting with ​Lionel Messi‘s in-swinging cross. Nonetheless, Bilbao continued to pose a threat of their own, with Raul Garcia’s inventive overhead kick bouncing just in front of Ter Stegen, yet the German was able to smother the effort.

Messi then struck the top of the crossbar with a 30-yard effort as Iago Herrerín came out to take the ball off Nelson Semedo after being played in by the Argentinian, however the left back was wrongly ruled out for offside. 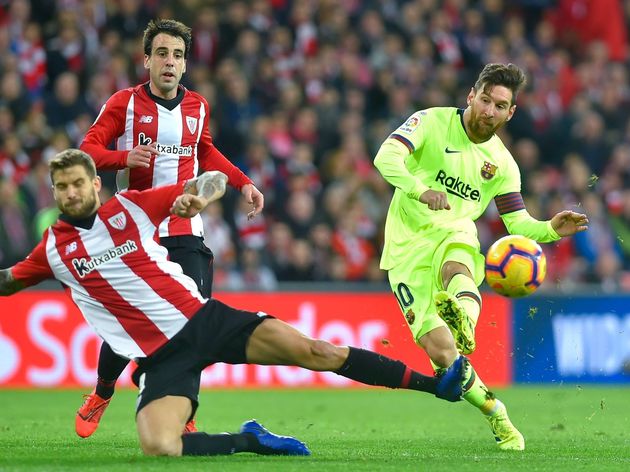 Athletic had their sixth shot of the game on the half hour mark as Yerey Álvarez headed over from a free kick swung in from the left. Five minutes before half time Los Leones once again came close to taking the lead as a cross found Garcia six yards out, whose goalbound effort was deflected wide, yet bizarrely given as a goal kick.

The question remained whether the hosts would rue not taking one of their numerous chances in a first half in which they were by far the better side, as ​Barcelona came out with more purpose in the second period. Ernesto Valverde’s team talk had the desired effect, yet every time the visitors found themselves in the final third, the killer pass deserted them.

With Bilbao camped inside their own half, they countered quickly and were inches from taking the lead against the run of play on 65 minutes, but Mikel San Jose’s effort from 20 yards flashed just wide. The visitors continued to knock on the door, with both Suarez and substitute Carles Alena both coming close for the La Liga leaders, as time began to run out for the Catalan giants. With eight minutes left to play, it was still the home side who were carving out the best opportunities, with only Inaki Williams knowing how Bilbao weren’t in front.

Iker Muniain picked out Williams near the penalty spot, and the striker had the whole goal to aim for, but the excellent Ter Stegen clawed out his effort with an instinctive right arm from point-blank range.

Neither side were able to break to deadlock as the clock ran down, but there was still time for Oscar de Marcos to receive a second yellow card and head for an early shower, as Ter Stegen earned his side what could prove to be a valuable point in their bid for the La Liga title.

The big question prior to kick off was whether or not Messi would be fit to start the match after only being fit enough for the bench in Barcelona’s Copa del Rey draw against Real Madrid.

Barcelona were uncharacteristically poor in the first 45 minutes, with Messi’s inclusion failing to spark life into Valverde’s side as they were second best in every department. They improved drastically after the break, but too many players were average on the day, hardly staking a claim for a start when the league leaders return to Champions League action in just over a week.

The draw could well be seen as a point earned, as they came up against a side in fine form under new boss Gaizka Garitano, having not lost under their new manager. Messi returned but was unable to steer his side eight points ahead of Real Madrid, instead they moved six clear of their nearest rivals on a tricky night in the Basque country.

The German was in inspired form on Sunday night, producing a series of excellent stops to deny a Bilbao side who were left scratching their heads as to how they didn’t score. His flying save in the first half to halt Susaeta was outstanding, but was bettered in the second half as he showcased cat-like reflexes to deny Williams from close range.

Often overlooked as one of the best keepers in the world, the 26-year-old demonstrated his importance to Valverde’s side on numerous occasions. Barcelona were below par on the night, yet had their goalkeeper to thank for keeping them from falling to a shock defeat.

Earning his place in the starting lineup in place of the injured Arthur, the Chilean failed in his audition for a regular starting berth with numerous misplaced passes lacking a cutting edge. Since arriving from Bayern Munich last summer, the 31-year-old has struggled to make an impact in Catalonia, often being confined to a tole on the bench. He was substituted at the 63rd minute for Carles Alena.

#Coutinho has not taken one shot on goal and he’s playing attack – Dembele needed.#Vidal is just too slow – #Alena needed

Those changes will help keep Bilbao in check

The ​La Liga leaders are back in domestic action next Saturday as they host Valladolid, then three days later travel to France to take on Lyon in the first leg of their Champions League round of 16 clash.

Bilbao meanwhile, face a crucial clash at the wrong end of the league table, travelling to bottom club Huesca before hosting mid-table Eibar.

How to plan your wedding in Ladakh