The hosts thought they had taken the lead in the 10th minute, only for Koke’s goal to be ruled out by the combination of referee Eduardo Prieto, who with help from VAR cited a foul in the build up.

Angel Correa was next to be frustrated by the man in the middle after appearing to be pushed by opposition defender Erick Cabaco when through on goal in a frustrating period for the Argentinean, who could have had three penalties.

Stubborn Levante, who shocked ​Barcelona in the ​Copa del Rey three days prior, were being seriously tested and had to make vital interventions to prevent the hosts from breaking the deadlock as both Griezmann and Vitolo were denied before the break.

The domination from Diego Simeone’s side was finally rewarded on 57 minutes, when Levante’s Nikola Vukcevic’s illegal attempt to handle Thomas Partey’s low cross was punished by top scorer Griezmann, who converted confidently from the spot for his 10th goal of the campaign.

Levante’s best chance of the game came in the 70th minute, but neither Jose Morales or Enis Bardi could force home an equaliser, as ​​Atletico secured a third consecutive clean sheet at the Wanda Metropolitano.

VAR has become a regular talking point in its second full season in Spain’s top flight. The first half in particular was marred by a spate of controversial decisions that could have seen two penalties given to the home side, yet neither VAR or Prieto saw any wrongdoing when Correa was twice brought down. However, the technology’s intervention helped Prieto to correctly award the game’s only goal, otherwise – they may have had Simeone to answer to.

The majority of Los Rojiblancos’ attacking play came through experienced winger Vitolo, whose trickery caused several problems behind the opponents back-line. Vitolo was instrumental throughout and was at the forefront of his sides best opportunities, notably feeding Partey for the game’s only goal.

To absolutely no ones surprise, as soon as we start Vitolo he does amazing. Him and Arias were our best players by far in that first half.

In fact, the 29-year-old would have counted himself unlucky not to get on the scoresheet and rightly received a rousing applause when he was replaced late on for Nikola Kalinic.

Perhaps harsh after helping his side to a clean sheet, but right back Santiago Arias often lacked cutting edge in offensive situations – predominantly in the first half. If the 27-year-old is to claim a regular spot under Simeone, his final third decision-making must improve.

After their 10th win this campaign, Atletico face Girona in the Copa del Rey last 16 round second leg with the tie finely poised at 1-1. 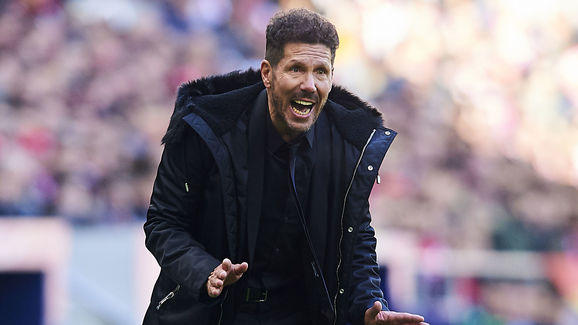 Meanwhile, Levante travel to the Camp Nou to face Barcelona on Thursday in their second leg with a slender 2-1 advantage.