Bayern Munich moved to within two points of Borussia Dortmund at the top of the league table thanks to a 3-2 win over FC Augsburg in the Bavarian derby, but it was an uphill battle from the outset as Niko Kovač’s side twice had to come from behind.

The hosts had the ball in the back of the net just 15 seconds after kickoff when Philipp Max’s low cross was turned into his own net by Leon Goretzka, with Manuel Neuer helpless to keep out the deflected effort.

Bayern Munich didn’t take long to get the game by the scruff of the neck despite their early setback, and Kingsley Coman pulled the visitors back on level terms with a smart finish underneath goalkeeper Gregor Kobel.

But another defensive lapse allowed Augsburg to retake the lead through former Sunderland midfielder Ji Dong-won. His left-footed strike from the edge of the box caught Neuer off guard and smashed into the roof of the net.

Robert Lewandowski’s looping header appeared to travel in slow motion before crashing off the woodwork just after the half-hour mark, but their second equaliser of the game came once again from Coman when the Frenchman fired the ball through Kobel’s legs.

It didn’t take long after the restart for Bayern Munich to go ahead for the first time in the match, with Coman this time turning provider for David Alaba to convert with a powerful shot into the far corner from a tight angle. 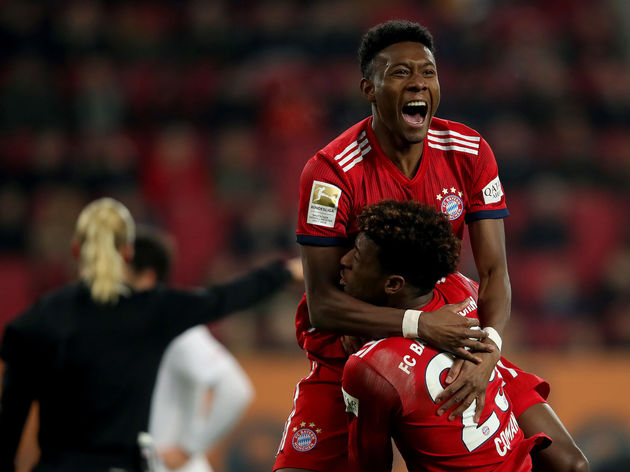 Augsburg tried their best to get back into the game but they’d used up all of their attacking threat in the first half, allowing Bayern Munich to cruise to three points throughout the remainder of the second half.

Scoring goals never has and never will be a problem for Bayern Munich (it’s inevitable you’ll find the back of the net with so many world-class attackers in your team) but once again Niko Kovač’s’s side left a lot to be desired at the other end of the pitch.

Even with Mats Hummels and Niklas Süle at the heart of the defence, Bayern Munich’s ability to cruise through a league season leaves them susceptible to lapses in concentration, which were exploited to their fullest against Augsburg. 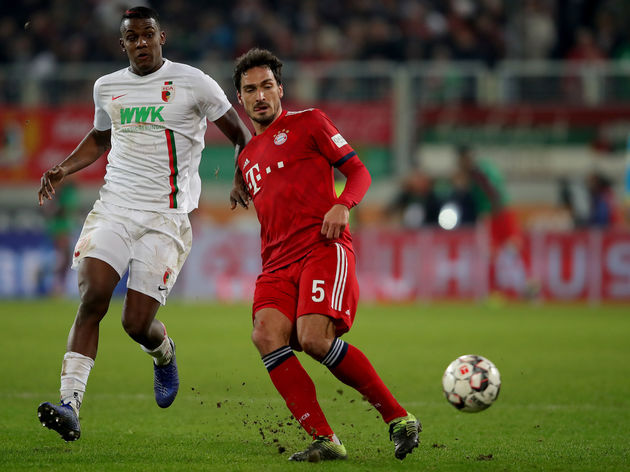 STAR MAN – It was a one-man army for Bayern Munich in their local derby on Friday evening, but when Kingsley Coman is in that kind of scintillating form more often than not that’s all you need to get over the line.

The Frenchman twice brought Bayern Munich back on level terms with smart finishes on either foot – he was denied a ‘perfect hat-trick’ by the width of the crossbar late on – and even popped up with the crucial assists for David Alaba’s winning goal.

WORST PLAYER – Liverpool fans will be licking their lips at the prospect of facing up against Niklas Süle and Mats Hummels in the Champions League knockout stages next week after the pair handed Augsburg a number of chances in their danger area.

Sule and Hummels won’t live with Liverpool’s press and intensity. Two slow, laboured centre backs. Could really punish these before the trip to Munich

Bayern Munich 1-0 down to Ausberg after 15 seconds. Their defence is a circus.

By the look of things, Liverpool is going to rippppp through Bayern Munich next week.

Although they were both equally as culpable as each other, more often that not it as the experienced Hummels who had to try and act as Bayern Munich’s get out of jail free card, making up for Süle’s mistakes.

The former TSG Hoffenheim star is one of the most exciting defensive players in the Bundesliga but he was well off the pace at the WWK Arena and offered Bayern’s Bavarian rivals a great chance to take something from the game. 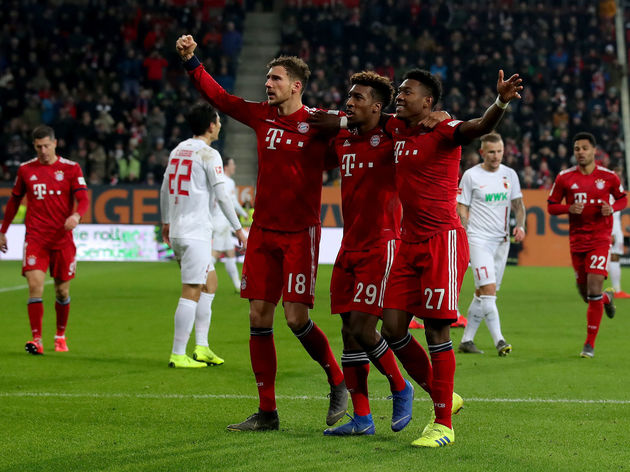 Focus now switches to the Champions League where Bayern Munich will travel to face Liverpool in the first leg of their knockout stage game, but they’ll know next week’s Bundesliga clash against Hertha BSC is just as important in their hopes of retaining the league title.

3 simple steps to get thicker eyebrows