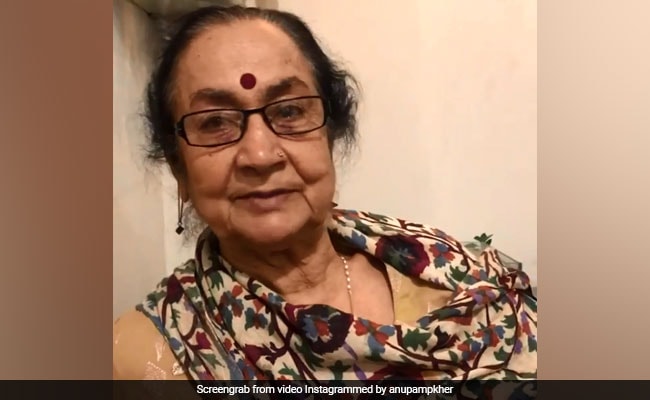 Anupam Kher’s mother gave a pop review of her son’s performance in ”The Accidental Prime Minister”, the politically controversial film on Manmohan Singh that releases today. She heaped praises on her son as well as the former prime minister.

The veteran actor shared a video on Instagram in which he asks his mother, Dulari Kher, if she liked the portrayal of Manmohan Singh.

Anupam Kher’s mother praised his acting skills and said she could not believe it’s her son and exclaimed, “What do you eat, I don’t understand!”.She gave him a “100 on 100”.

“I really liked the film and I am sure everyone will like it too,” Dulari Kher said.

Anupam Kher posted the video with the caption, “Mother of all Reviews: Dulari Watched #TheAccidentalPrimeMinister and has given her review in a one minute video.”

The veteran actor said his mother’s observation about Manmohan Singh is “spot on” and called her review his “ultimate reward”.

”The Accidental Prime Minister”, based on a book of the same name by Manmohan Singh’s then media advisor Sanjaya Baru, shows Anupam Kher in a very realistic portrayal of the 86-year-old who ruled India for 10 years until the Congress was voted out of power in 2014. The trailer of the film created a storm on social media and led to a war of words between the Congress and the BJP.

It showed scenes in which Dr Singh appeared to be under pressure from his party, especially then Congress chief Sonia Gandhi and her son and successor to the post, Rahul Gandhi.

The Supreme Court on Thursday refused urgent hearing on a petition challenging the January 7 order of the Delhi High Court which had disposed of a petition seeking to ban the trailer of “The Accidental Prime Minister”.