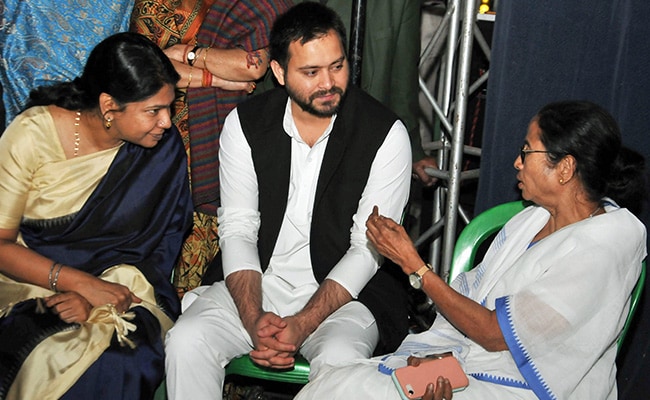 Tejashwi Yadav, the son of Bihar leader Lalu Yadav, and Kanimozhi of Tamil Nadu’s opposition DMK, visited Bengal Chief Minister Mamata Banerjee this evening at the dharna site where she has been camping out since last evening.

The Bengal chief minister has declared an indefinite “satyagraha” to “Save the Constitution” after yesterday’s huge showdown between the state police and the Central Bureau of Investigation, which tried to question the city police chief over two Ponzi schemes in Bengal.

In the backdrop of the hiccups faced by the opposition in forging a united front against the BJP, Tejashwi Yadav said if all political parties don’t unite, the people of this country “will not forgive” them.

For now, the flashpoint between the centre and Mamata Banerjee has brought most of the opposition parties on the same page.

“I would say that this episode was Modi-ji’s pre-election gift to Mamata Banerjee… the whole country is now looking at her… the BJP has realised after January 19 rally that they won’t return to power,” said Ms Kanimozhi.

“Using institutional power to drive us apart… they are mistaken if they think that is what will happen. We have learnt to celebrate our differences. India will not accept this,” she added.

Both Lalu Yadav and DMK chief Stalin, who is Kanimozhi’s brother, have tweeted support for Ms Banerjee, who has taken the initiative to forge a united opposition to take on the BJP in the coming national elections.

“It is a political conspiracy to use the CBI against political opponents. Narendra Modi is elder to us, and he should understand that the PM comes and goes, but the institutions of this great country remain,” Tejashwi Yadav said.