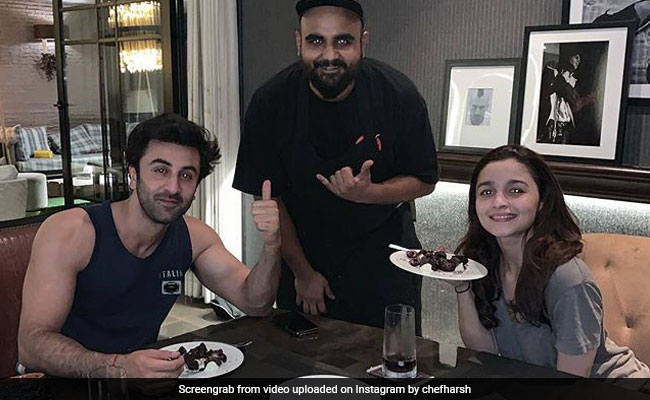 OMG! Did they just confirm they are dating? Arre, we are talking about Ranbir Kapoor and Alia Bhatt. While we know they have never said it in as many words but if an adorable photo of their Valentine’s Day dinner isn’t a confirmation then we don’t know what is. So, the Brahmastra co-stars decided to stay in on Valentine’s Day only to enjoy a three-course meal prepared by Ranbir’s personal chef Harsh Dixit. Chef Dixit shared a glimpse of the lovebirds’ Valentine’s Day dinner and explained how it was a unique one. “Happy Valentine’s Day. All smiles post a not so nasty 3 course valentines dinner. The menu tonight included a bunch of aphrodisiacs like red chillies, avocado, cinnamon, garlic, asparagus, truffle, salmon, chocolate, cherries, vanilla and lots of love. Obviously Zero sugar coz diet.”

Wow, that sounds awesome and that’s also making all those feel guilty about over indulging on calories on Valentine’s Day.

In the photo, Ranbir and Alia can be seen enjoying dessert (chocolate, cherries, vanilla and lots of love) while they take a break to pose for the cameras. Dressed casually, they appear to be at Ranbir’s apartment.

In September last year, it was reported that Alia Bhatt had taken over as Ranbir Kapoor’s dietitian and put the 36-year-old actor on a healthy diet. On his birthday, also in September, Chef Dixit shared glimpses of Alia preparing a pineapple cake for Ranbir. In an interview with Hot Friday Talks in November, Chef Harsh revealed: “She wanted to bake a cake and she didn’t know how to so I helped her. It was a completely indulgent cake with all the likes of butter and sugar etc. etc. She baked a pineapple cake for him as he likes pineapple cakes. We were supposed to make a chocolate cake but she randomly asked Ranbir and he told her he likes Pineapple cake too so we decided to do that.”

A hospitality management graduate by qualification, with a bagful of experience and knowledge about food, he is always experimenting with different ingredient and whips up delicious yet nutritious and healthy meals for his clients.No wonder Ranbir Kapoor does not want to let go of him and trusts professional chef Harsh Dixit completely with his food.