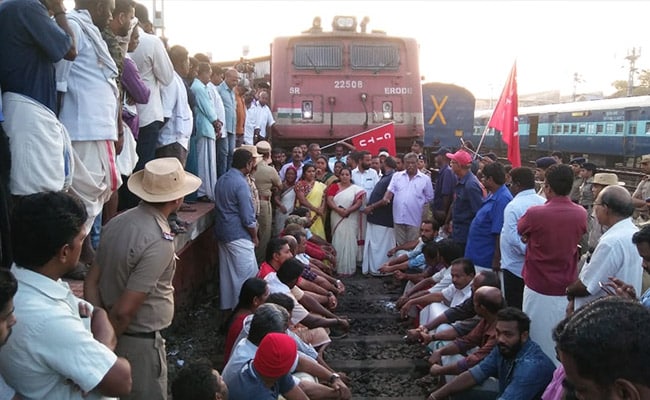 Violence has been reported from several places in West Bengal as the two-day nationwide Bharat Bandh kicked in this morning. Ten Central Trade Unions (CTU) have called the strike alleging anti-worker policies of the Central government. Clashes were seen in Kolkata, Asansol and Hooghly districts in West Bengal. The police had to lathicharge as Trinamool Congress and CPM workers clashed in Asansol. Chief Minister Mamata Banerjee has said that her government is opposed to any bandh.

“We have taken a stand of not supporting any bandh. Enough is enough. In the last 34 years, they (Left Front) have destroyed the state by calling bandh. There will be no bandh,” Ms Banerjee told reporters at the state secretariat.

A school bus was vandalised in Barasat, around 30 kilometre from Kolkata. Two students were in the bus but none of them were hurt. Buses were vandalised in Asansol and Hooghly as well. Train services have been disrupted in Jadavpur, Sodepur, Rishra and Uttarpara.

In neighbouring Odisha, trade union CTU members protested and blocked roads in Bhubaneswar. Train traffic was also disrupted in parts of Kerala where protesters sat on the railway tracks and raised slogans.

In Delhi’s Patparganj, members of the All India Central Council of Trade Unions (AICCTU) were out on the streets, protesting privatisation of government sector businesses. Protesters raised slogans demanding minimum wages and social security.

Around 20 crore workers of the central trade unions are participating in the two-day nationwide strike today and tomorrow, said Amarjeet Kaur general secretary of All India Trade Union Congress (AITUC). “As many as 10 CTUs have joined hands…this is the largest number of workers from formal and informal sectors joining the strike against anti-worker policies of the BJP-led central government,” Amarjeet Kaur said on Monday.

Workers from sectors such as telecom, health, education, coal, steel, electricity, banking, insurance and transport are supporting the strike. Farmers and students’ groups have also supported the strike.

On Wednesday, the protesters have planned to march from Mandi House to Parliament and similar marches will be held across the country, said trade union leaders. The unions alleged that suggestions on labour codes were given to the government but they were rejected.

Trade union leaders alleged that the government has “failed to create jobs and grossly ignored” the 12-point charter of demands, which includes minimum wages and social security schemes. The Group of Ministers headed by Finance Minister Arun Jaitley on labour issues is unwilling to discuss matters, claimed the trade unions.