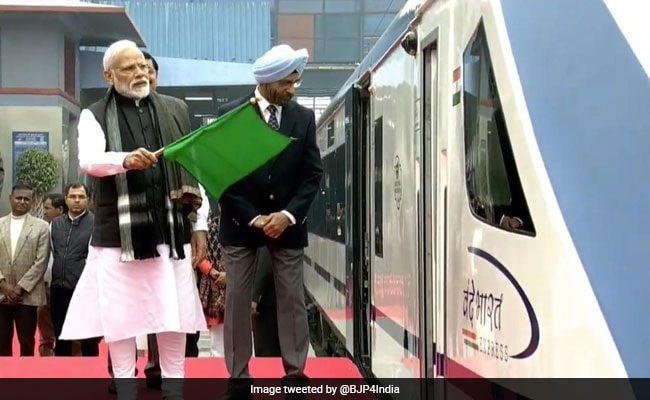 The government going ahead with the launch of the Vande Bharat Express the morning after the worst terror attack on security forces in Jammu and Kashmir’s Pulwama was a “befitting reply” to the terrorists responsible for the death of over 40 CRPF personnel, Railway Minister Piyush Goyal said.

Prime Minister Narendra Modi flagged off India’s first semi-high speed train. The mood at the venue in Delhi was sombre as PM Modi waved the green flag to flag off the train.

“The way Mumbai answered them, with everybody going to their work discharging their responsibilities, similarly the Vande Bharat Express today was dedicated to the nation on time in the service of its people. “This is the biggest answer to the terrorists. Neither our jawans nor our people would ever bow before them,” Piyush Goyal said on board the train which is on its inaugural run between Delhi and Varanasi. He said the country and its soldiers are capable of answering the terrorists in a befitting manner.

PM Modi and the ruling BJP have cancelled all political programmes they had planned today to campaign for the upcoming national election. He had held a high-level security meet with top ministers earlier in the day.

Aam Aadmi Party (AAP) leader Alka Lamba criticised PM Modi for going ahead with the Vande Bharat Express launch. “If the Prime Minister had some shame, then the train’s inauguration could have been done a few days later or without your going there,” she tweeted in Hindi.

“We want to send out a message. We want to make it clear that while all political programmes have been cancelled as we stand by the nation, but the development works of the country would continue with even more speed,” BJP spokesperson Sambit Patra told reporters in a press conference.

“We want to send out a message. We want to make it clear that while all political programmes have been cancelled as we stand by the nation, but the development works of the country would continue with even more speed,” Mr Patra told the media

Speaking at the inauguration, PM Modi warned that those responsible for the Pulwama attack – that has left the country in shock and anger – would pay a “very heavy price” and had made a “big mistake”.

Vande Bharat Express, or Train 18 as it was called earlier, will travel from Delhi to Varanasi in nine hours and forty-five minutes.PM Modi inspected the train and said he was proud that such a train had been produced indigenously at the Integral Coach Factory in Chennai in 18 months.

Over 40 CRPF personnel were killed when a Jaish suicide bomber rammed a vehicle carrying over 350 kg of explosives into security buses in south Kashmir’s Pulwama.