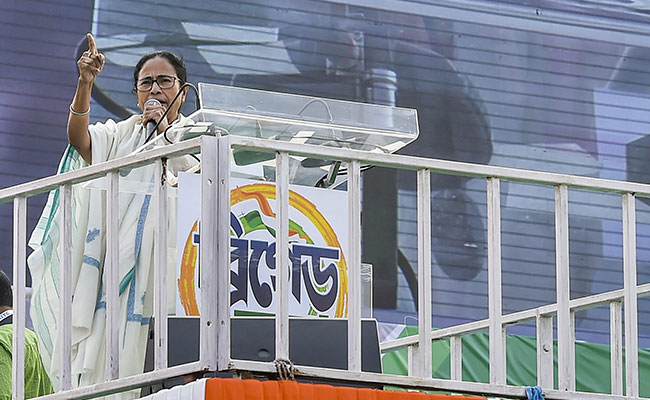 A Central Bureau of Investigation (CBI) team’s surprise visit to the Kolkata police chief Rajeev Kumar’s house triggered a bitter war of words between the BJP and opposition leaders on Sunday. The team was whisked away from his residence–first to the Park Street police station and then to the local Shakespeare Sarani police station. Various leaders of the opposition parties rallied in support of West Bengal Chief Minister Mamata Banerjee, who sat in protest at Metro Channel area in central Kolkata.

Leading the opposition’s onslaught was Lalu Yadav’s son Tejashwi Yadav, who said the state government had to take the move due to the “political decisions” the CBI had been taking at the behest of the BJP.

“For the past few months, the CBI, under pressure of the BJP office, had been taking political decisions, forcing state governments to take such decisions. If the CBI continues to work as an alliance partner of the BJP, it won’t be surprising if the people take matters into their own hand. Nobody is above the people in democracy,” he tweeted.

“Because of BJP government’s exploitative policies and CBI’s brazen political misuse, the constitution and the people’s independence is in peril. Hence, we completely support Mamata Banerjee’s dharna. People and the opposition of the country are united to defeat the BJP in elections,” Samajwadi party chief Akhilesh Yadav tweeted.

We strongly condemn the incidents happening in Kolkata, a glaring example of how Modi-Shah duo are destroying the institutions. Attacking political opponents in different States, few days before the Parliament elections commence, will have disastrous consequences in the country.

Former BJP leader Yashwant Sinha was quick to slam the government for the showdown in Kolkata.

“Prime minister is determined to destroy all the institutions of democracy. Now he destroying the federal structure of our country. Wake up and stop it before it is too late,” he tweeted.

BJP planning a constitutional coup ? 40 CBI officials surround Kolkata Police Commissioner’s home. Destruction of institutions goes on unabated. Our demand in #Parliament on Mon. Modi has to go. We are reaching out and sharing this with all Oppn parties who want to #SaveDemocracy

The opposition’s barbs were returned with equal intensity by BJP lawmaker Babul Supriyo.

Another BJP leader, Kailash Vijayvargiya called the confrontation a “murder of democracy.”

“Shameful anarchy, murder of democracy!! The CBI team that had gone to raid police commissioner’s house was stopped, beaten, taken to the police station. Talks of a CBI probe has been happening on the Supreme Court’s direction since 2014. Is it not political frustration,” he tweeted.

“The incident taking place in Kolkata are unfortunate. Mamata Banerjee wants to protect the corrupt in her state, like a dictator. She is obstructing investigation of the CBI which was there as per the Supreme Court order. She is shredding apart the constitution,” news agency ANI quoted her as saying.

Rajeev Kumar, who headed the special investigation team probing the Saradha and Rose Valley Ponzi scams that had surfaced in Bengal in 2013, was asked to help with the investigation when several key documents of the cases allegedly went missing. Over the last two years he had received several summons for questioning, CBI sources said.

This afternoon, Chief Minister Mamata Banerjee had tweeted describing Mr Kumar as the best police officer in the country. She also accused the BJP of engineering the controversy and media reports that Mr Kumar may be arrested for evading questioning in the chit fund case.

A bitter turf battle is on between the BJP and Mamata Banerjee’s Trinamool Congress for the last few months. While Ms Banerjee is currently leading the anti-BJP block of opposition parties, her government in West Bengal recently blocked BJP’s planned political procession.

Ms Banerjee on January 19 organised a rally of opposition leaders, in which she attacked the Modi government. “Just because I organised a United India rally, they are doing all this. Amit Shah and PM Modi are doing all they can to target us,” she said today.

Uttar Pradesh Chief Minister Yogi Adityanath, who was scheduled to address the “Ganatantra Bachao Rally” at Balurghat in South Dinajpur district, more than 400 km from Kolkata, could not attend the rally after permission was denied for his chopper to land near the venue. Yogi Adityanath office said permission was withheld “without any prior notice.

Mr Adityanath addressed the rally on phone, urging the leaders, who had attended her rally, to introspect on how democratic rights were being scuttled by the state government.