In her reply to a debate on the Rafale deal, Sitharaman compared the negotiations conducted by the Modi government with those under the UPA to contrast transparency against “opaque wheeling-dealing”. Asking why the UPA did not conclude the contract, she suggested this was because “something” was not delivered and added: “They (Congress) did not get the money”. 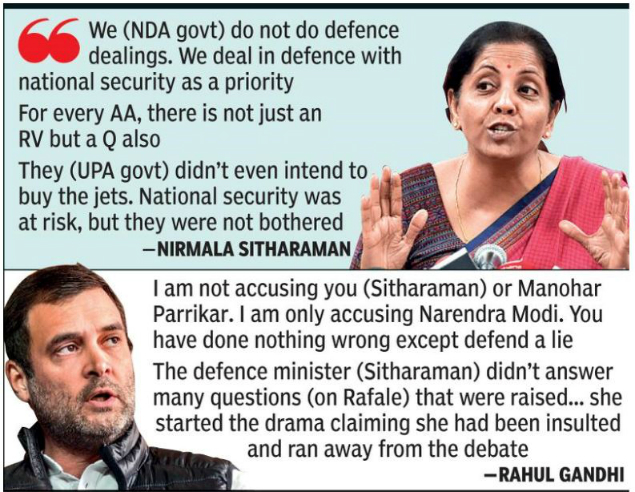 The minister said the Modi government was “dealing in defence” while Congress was used to indulging in “defence dealing”. She countered the charge that the fighters’ induction has been delayed and the contract whittled from 126 planes, saying the planes were not purchased off the shelf and that Congress is guilty of a “non-deal” as it never concluded the negotiations it has said were superior to the NDA deal.

The minister argued that accusations that the Rafale contract had been snatched from HAL were incorrect and said it was for the opposition party to answer why production under the defence PSU was not initiated when Congress was in office.

In an echo of PM Modi’s jibe at Rahul Gandhi as a “namdar (privileged)” as against “kamdar (workers)”, Sitharaman said, “We don’t come from elite backgrounds, we have earned our honour and risen through the ranks. You cannot destroy our honour like this.”