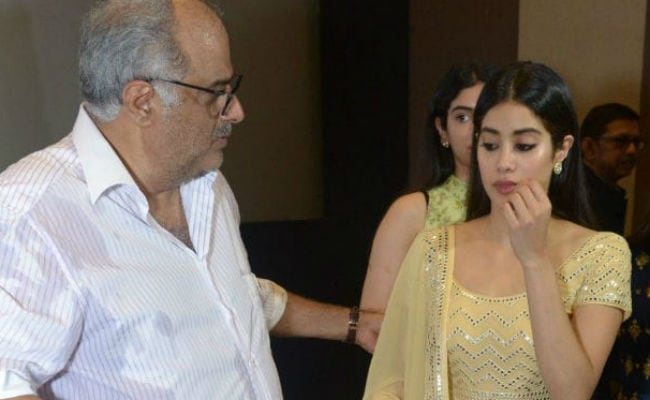 Ahead of Sridevi’s death anniversary, her husband Boney Kapoor, daughters Janhvi and Khushi and brother-in-law Anil Kapoor, held a puja for the late actress on Thursday at her Chennai home, reports news agency IANS. “The puja happened in the morning at her Mylapore bungalow with only close friends and relatives,” a source told IANS. Actor Ajith Kumar and his wife Shalini, English Vinglish director Gauri Shinde and her filmmaker husband R Balki also attended the puja apart from the Kapoor family. Pictures of Boney Kapoor and Anil Kapoor arriving to attend the puja have also surfaced on the Internet.

Sridevi died on February 24, 2018, in Dubai after drowning in her hotel bathtub. She was in Dubai for a family wedding. Sridevi was cremated with full state honours in Mumbai.

Sridevi married Boney Kapoor in 1996. Janhvi, who debuted in Bollywood last year, is the couple’s elder child. “I fell in love with Sridevi when I saw her for the first time on the screen. It was one-sided love since the beginning. I chased her in the sense that I went to Chennai to sign her but unfortunately she was not available at that time. I was in awe of her, her work,” Boney Kapoor said during an event held in August in New Delhi on Sridevi’s birth anniversary, PTI reports.

Sridevi worked with Boney Kapoor in films such as Roop Ki Rani Choron Ka Raja and Judaai. Her last film MOM was also co-produced by him.

Boney Kapoor is now producing the Tamil remake of Pink, which stars Vidya Balan and Ajith Kumar. Sridevi co-starred with Ajith Kumar in the Tamil version of English Vinglish and Boney Kapoor said that she wanted Ajith to do a Tamil film with their production house.

“While working with Ajith in English Vinglish, Sridevi had expressed her desire that Ajith does a Tamil film for our home production. Nothing exciting came up till one day last year. Ajith suggested remaking Pink in Tamil. She immediately agreed as she thought it was most appropriate and timely film to make and Ajith would bring all the elements required to make it into a great Tamil film,” IANS quoted Boney Kapoor as saying.

(With IANS and PTI inputs)