Gennaro Gattuso’s side sit ninth in the league table heading to Lombardy. Their hosts Brescia, however, are sat in the relegation zone with an almighty seven points the difference between them and 17th-placed Sampdoria. Both teams will be desperate to get three points on the board as they look towards their respective goals of securing continental football and achieving a miraculous escape from the drop.

The hosts will be without forward duo Florian Aye​ and Ernesto Torregrossa who are both suspended for the fixture. Aye hasn’t scored a single goal in the league this season, so it is unlikely he will be missed. Torregrossa has been in better form, however, scoring four in 12 appearances.

Sandro Tonali and Rômulo Souza are also unavailable for selection for Brescia as the pair recover from minor injuries.

Napoli have a fairly long list of absentees as Kevin Malcuit (ACL) and Hirving Lozano (muscle) are both definitely sidelined for the clash. Arkadiusz Milik (knee) and Elseid Hysaj (knee) are major doubts, whereas Faouzi Ghoulam is suffering with illness.

Napoli are undefeated in the previous eight clashes between these sides, with Brescia only able to win the first of the nine meetings this century. 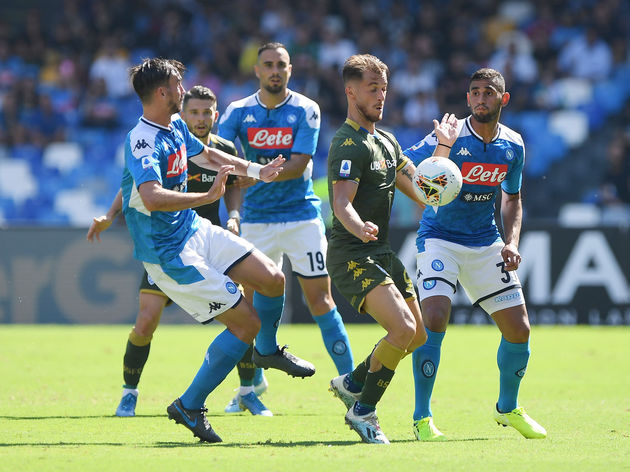 When the two sides met earlier in the season at Stadio San Paolo, Napoli ran out 2-1 winners as ​Dries Mertens and Kostas Manolas rounded off a commanding display.

It’s safe to say that the hosts are one of the most out-of-form sides in ​Serie A at the moment, as they sit firmly in the relegation zone and without a win in their last eight matches in all competitions. In fact, Brescia’s last victory was a 3-0 home success against Lecce in December.

Napoli on the other hand have had a turn in fortunes in recent weeks, winning five of their last six outings. With a Europa League spot finally in their sights, Napoli will be hoping to move up to sixth with a victory on Friday, even if only temporarily.

Here’s how each side have faired in their last five fixtures:

With Brescia deep in the relegation battle and with ​Napoli having hope that they can qualify for Europe, it seems as if there can only be one winner here.

The hosts are without two attackers and have suspensions to two players, making them an even weaker side for Gattuso’s men to take advantage of.

Casemiro Reveals it is Time to Win the Coronavirus Fight, Not to Think About Football

Angel Di Maria Hits Out at Manchester United; Claims That He...

​Raul Has Convinced Real Madrid and Could Become the Next Coach...