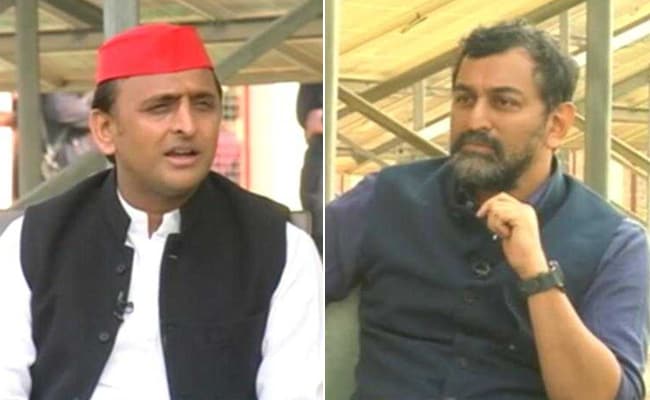 Akhilesh Yadav, a day before what is tipped to be the announcement of his grand alliance with Mayawati for the national election, dropped a strong hint that the Congress was likely to be out of the “club” as he spoke exclusively to NDTV.

“We can give the Congress two seats in Uttar Pradesh they have always held,” Akhilesh Yadav said, but refused to give a direct answer on whether the alliance between Samajwadi Party and Bahujan Samaj Party (BSP) for the general election due by May would include Rahul Gandhi’s party.

“I don’t want to say anything about the Congress because first we need to resolve the alliance of Samajwadi Party and BSP.”

Akhilesh Yadav and Mayawati have called a joint press conference tomorrow at noon at a five-star hotel in Uttar Pradesh capital Lucknow. The two parties have been in talks for weeks and last week, their meeting in Delhi raised a lot of talk over reports that the two former chief ministers had decided on their pact as well as the allocation of seats, leaving the Congress out of the equation.

The Mayawati-Akhilesh combo is believed to have decided not to field candidates in Amethi and Raebareli, the seats held by Rahul Gandhi, the Congress president, and his mother Sonia Gandhi.

Smaller parties like the Rashtriya Lok Dal and the Nishad Party are also likely to be in the alliance.

“Whether the Congress is with us or not is difficult to say at this point,” said Akhilesh Yadav.

The Samajwadi party chief had given the Congress enough to worry about with his comments last month on being denied a place in the Madhya Pradesh Congress government despite its role in helping the party reach the majority mark. He had said that by not making the Samajwadi lawmaker a minister, the Congress had “cleared the path for Uttar Pradesh”.

Akhilesh Yadav said it was the BJP “which taught us to ally with parties and win elections”.

The alliance with Mayawati was very important, said the former chief minister, because the BJP, with its alliances, had won 73 of Uttar Pradesh’s 80 seats.

“How did Samajwadi Party win Gorakhpur, which was (Chief Minister) Yogi Adityanath’s seat? We understood the ground realities and joined hands with the Nishad party. In Kairana, we worked with the Rashtriya Lok Dal,” said Mr Yadav about the by-poll victories that inspired his coalition with Mayawati for the 2019 polls.

The Samajwadi Party was mauled in the 2014 national election as it could win only five seats. Akhilesh Yadav’s attempt to retain power in UP in the 2017 state polls by joining hands with the Congress came a cropper, despite the catchy slogan of “UP ke ladke” denoting the Akhilesh-Rahul Gandhi duo.