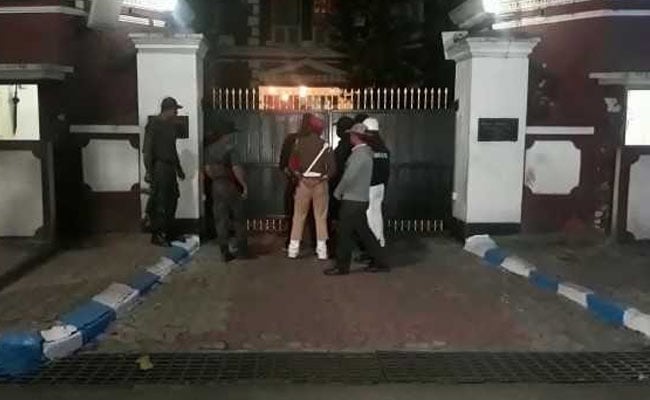 The assurances of Bengal Chief Minister Mamata Banerjee and the Kolkata Police about its chief attending office regularly, led to a huge drama this evening: Officers of the Central Bureau of Investigation turning up at the Park Street home of police chief Rajeev Kumar – only to have the police guards stationed there refuse them entry.

Senior police officers rushed to the spot and virtually shepherded the CBI team away from the residence — first to the Park Street Police Station and then to the local Shakespeare Sarani police station. The state police chief and the entire brass have reached Mr Kumar’s home along with the Chief Minister and consultations are on

Senior Trinamool Congress leader Derek O’Brien tweeted, asking if BJP was planning a coup by sending 40 CBI officers to the home of the police commissioner.

Rajeev Kumar, who headed the special investigation team probing the Saradha and Rose Valley Ponzi scams that had surfaced in Bengal in 2013, was asked to help with the investigation when several key documents of the cases allegedly went missing. Over the last two years he had received several summons for questioning, CBI sources said.

This afternoon, Chief Minister Mamata Banerjee had tweeted describing Mr Kumar as the best police officer in the country. She also accused the BJP of engineering the controversy and media reports that Mr Kumar may be arrested for evading questioning in the chit fund case.

The reports came hours after Prime Minister Modi attacked Mamata Banerjee in his public rallies in Bengal and the chief minister hit back. Mr Kumar, the reports said, had been summoned several times by CBI, they claimed but he had not responded.

The highest levels of the BJP leadership are doing the worst kind of political vendetta. Not only are political parties their targets, they are misusing power
to take control of the police and destroy all institutions. We condemn this 1/2

The Kolkata Police Commissioner is among the best in the world. His integrity, bravery and honesty are unquestioned. He is working 24×7, and was on leave for only one day recently. When you spread lies, the lies
will always remain lies 2/2

Arzound 4 pm today, Additional Commissioner of Kolkata Police Javed Shamim held a press meet and said the police would take action against defamatory reports carried by some media outlets, describing Mr Rajeev Kumar as “missing” and as an “absconder”. The police said the reports were mala fide and planted.

Some CBI officers are still outside the Commissioner’s house.

A police team, meanwhile have reached the CGO complex at Salt Lake, which houses the CBI office.