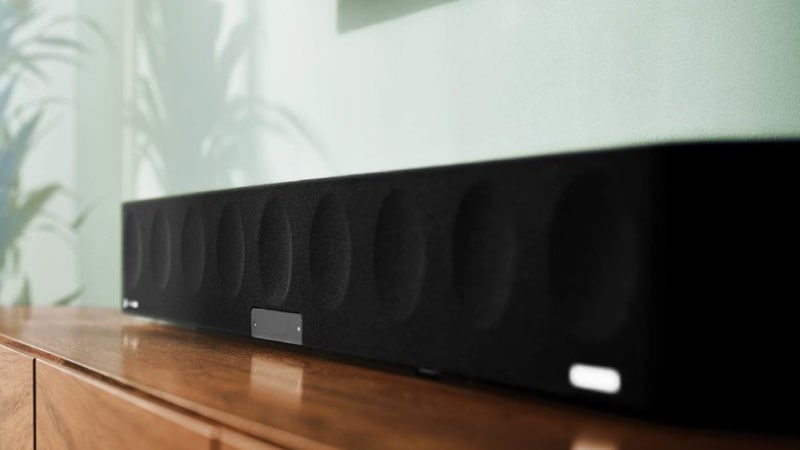 Sennheiser has largely stuck to the business of headphones for its consumer lineup, although it has a small range of professional speakers in its range. It’s a classic approach that has helped the company grow into one of the biggest and most successful headphone makers in the world, but it’s an approach that has now been put aside. At CES 2019, Sennheiser launched its first-ever consumer speaker, the Ambeo Soundbar. The new speaker will go on sale in May 2019 at a price of EUR 2,499 (approximately Rs. 2,00,000).

The Sennheiser Ambeo Soundbar is, for the company’s first attempt at making a consumer speaker, quite glorious at first glance. Featuring Ambeo 3D technology specially tuned for a soundbar, the speaker comes with 13 speakers – six woofers, four tweeters and two top-firing speakers. The soundbar is claimed to replicate a typical 5.1.4 home theatre setup, with five regular speakers, one subwoofer and four additional corner speakers. The device does this virtually using just the single speaker array and bouncing audio off your room walls to replicate the surround sound effect.

While it’s anything but affordable given that you can buy a good soundbar at under Rs. 10,000 in India, the Sennheiser Ambeo Soundbar is definitely looking like it will be a capable option. While genuine surround sound setups are a big draw, the space and complicated setups discourage a lot of users, who will be better served by a soundbar. That said, the Sennheiser Ambeo Soundbar is rather large for what it is, so you will need a fair amount of mounting space right below your TV.

The soundbar is additionally compatible with Dolby Atmos, and also supports audio streaming over Google Cast and Bluetooth, the company announced at CES 2019. Sennheiser launched its Ambeo Smart headset last year, which is capable of recording 3D audio on the move. The Ambeo sub-brand by the company covers many of its upcoming 3D audio technologies, including audio recording and in the case of this soundbar, 3D virtual surround sound.

Adobe, Microsoft to Take on Salesforce's Marketing Software, With LinkedIn as...