​Monaco’s attempts to sign Chelsea’s Cesc Fàbregas are believed to have stalled, as the Ligue 1 outfit are thought to be unwilling to meet the Blues’ £10m asking price.

After failing to earn a place in Maurizio Sarri’s starting line-up, the Premier League legend is set to move on from Stamford Bridge this summer, and is widely believed to have played his last game for the Blues – after his emotional send-off during his side’s 2-0 FA Cup win over Nottingham Forrest last weekend.

What a career he’s had at the Blues! pic.twitter.com/GaFpFKFU1T

According to the Standard, ​Fàbregas‘ move to Monaco has been delayed, as Les Monégasques believe ​Chelsea‘s £10m asking price to be unfair, given that the player’s contract expires at the end of the season. The report claims that the Ligue 1 side have already agreed a two-and-a-half-year deal with the Spanish sensation, and are eager to conclude the deal.

It is clearly only a matter of time until the 31-year-old completes his switch to the Mediterranean principality, but the delay could well frustrate Blues boss Maurizio Sarri, who will be eager to secure a replacement as soon as possible. Cagliari starlet Nicolo Barella is believed to be top of the former Napoli manager’s wish list, but his £45m asking price could scupper the deal. 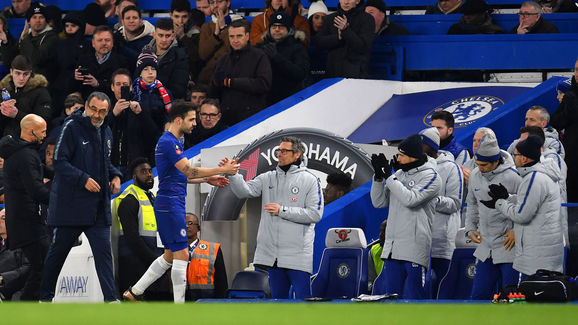 Clearly, while the Blues have a wealth of central midfield options, Sarri is keen to build his own squad capable of adapting to his distinctive, ‘Sarriball’ style of football. This could come as bad news to England internationals ​Ruben Loftus-Cheek and Ross Barkley, who are likely to miss out on first-team football should a replacement for Fàbregas be secured in January.

In other news, ​Bayern Munich are believed to be ready to hand Callum Hudson-Odoi the much-coveted number ten shirt, should he agree to join the Bundesliga giants in January. The 18-year-old has been heavily linked with a move away from Stamford Bridge, and could apparently land himself Arjen Robben’s shirt should he opt to leave the Blues this month.

How Aaron Ramsey Has Quickly Established Himself as a Key Figure...