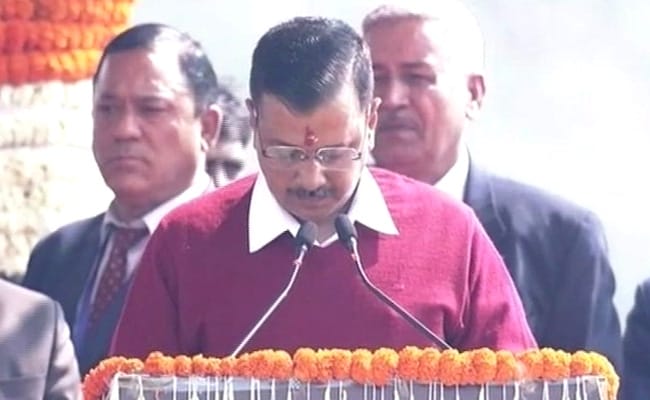 Arvind Kejriwal at his swearing-in ceremony at Delhi’s Ramlila Maidan.

New Delhi: Arvind Kejriwal and his six ministers took oath today at a mega ceremony at Ramlila Maidan, outside Delhi’s iconic Red Fort, that was attended by a huge crowd. Mr Kejriwal’s key ministers — Manish Sisodia, Satyendar Jain, Gopal Rai, Kailash Gehlot, Imran Hussain and Rajendra Gautam – will be part of his new cabinet. Dedicating his victory to the people, Mr Kejriwal, in his address, said, “Elections are over now. No matter who you voted for, you are part of my family.Party affiliations never stopped me from working for anyone”. Delhi has re-elected Mr Kejriwal’s Aam Aadmi Party with 62 seats – a near repeat of its 2015 tally of 67 seats — at the end of one of the most polarising campaigns in the backdrop of the anti-CAA (Citizenship Amendment Act) protests.

Here are the top 10 points in this big story: