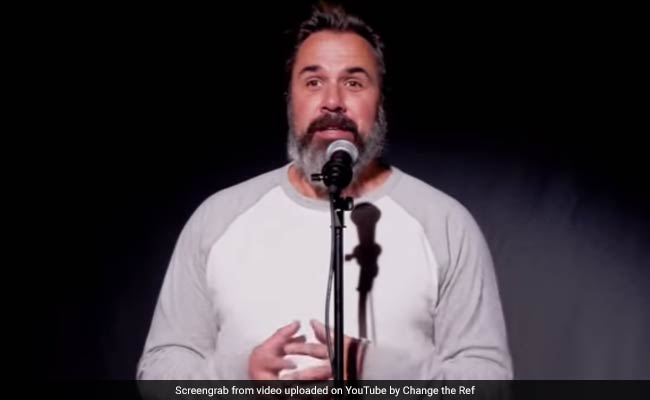 Parents were angered after Louis C.K. mocked victims of the Parkland, Florida, school shooting during a stand-up routine in December. “My daughter was killed in the Parkland shooting. My son ran from the bullets. . . . Why don’t you come to my house and try out your new pathetic jokes?” one father tweeted after audio of the set was leaked online.

But C.K., who is attempting a career comeback after admitting he masturbated in front of female colleagues, doubled down last month while onstage at a San Jose comedy club. In one joke, he confronted his indiscretions and addressed why he mocked the Parkland victims.

“If you ever need people to forget that you jerked off, what you do is you make a joke about kids that got shot,” C.K. said, according to Daily Beast writer Stacie Solie, who watched the comedian’s routine.

One father responded in an unconventional way. Instead of blasting C.K. on Twitter, Manuel Oliver rebuked the comedian by trying to outshine him in his own game: He recorded his own stand-up set.

“Recently, I heard this great line from a comedian,” Oliver begins, standing in front of a microphone on what appears to be a dark stage. A nearly empty bottle of water sat on a stool next to him. “He said, ‘If you want people to forget that you were jerking off, just make a joke about kids getting shot.'”

“And I thought, ‘Jokes about kids getting shot?’ I can do that.”

Oliver then tells the story of a student who went to school one Valentine’s Day. A skinny kid wearing headphones. His father dropped him off at school. “I love you,” he told his father before getting out of the car. He was shot to death a couple of hours later.

“You guys ever heard dead baby jokes? I got a dead baby. His name was Joaquin Oliver. He’s going to be 18, but now he’s dead,” Oliver says, pausing and looking straight at the camera. “And that’s not a joke.”

Oliver then quietly walks away.

It was not immediately clear if Oliver actually performed at a comedy club, or if the routine was filmed elsewhere. The video was published this week as part of a public service announcement by Change the Ref, a gun control organization that Oliver and his wife, Patricia, started. Oliver did not immediately return a call seeking comment Saturday.

His son, Joaquin, or Guac, was one of the 17 students and staff who were killed on Feb. 14, 2018, when a gunman opened fire at Marjory Stoneman Douglas High School.

The Parkland survivors have since become activists. They spoke at rallies, testified in front of lawmakers and appeared on the cover of Time magazine. Their voices advocating for gun control have been among the loudest that they themselves have become targets of criticisms, ridicule and conspiracy theories.

David Hogg, for example, was accused of being a crisis actor. Fox News host Laura Ingraham ridiculed the Parkland survivor for being rejected by four California universities. Hogg later said he was accepted into Harvard University, where he’ll major in political science.

During C.K.’s comedy routine at a Long Island comedy club last December, he criticized the student survivors for testifying before Congress.

“What are you doing? You’re young. You should be crazy, unhinged. Not in a suit, saying ‘I’m here to tell. . .'” C.K. said in the audio clip. “You’re not interesting because you went to a high school where kids got shot. Why does that mean I have to listen to you? How does that make you interesting. You didn’t get shot. You pushed some fat kid in the way and then, now I gotta listen to you talking?”

He went on to question why people are distraught by school shootings.

“Everybody gets upset when there’s a shooting at a high school. I don’t really see why it’s any worse than anybody else dying. I don’t. Cuz a lot of people die, every day 7,500 people die in America, OK, so that day 17 kids got shot in a school. What about the other . . . 7,500 people. They didn’t die in their sleep. Some of them got electrocuted. By their parents. People get upset because they’re young. Because they died so young. That’s offensive to me.”

Controversy erupted on social media. Aalayah Eastmond, a Parkland survivor who testified before Congress that she hid beneath a dead classmate’s body during the shooting, urged C.K. talk to her directly instead of mocking her behind closed doors.

Back onstage at the San Jose comedy club in mid-January, C.K. explained the crudeness of his jokes. “The whole point of comedy is to say things that you shouldn’t say,” he said, according to Solie’s account.

C.K. disappeared from public view and came back in August, less than a year later. He showed up unannounced at New York’s Comedy Cellar and performed a brief set.

He has since been trying to make a comeback, appearing at comedy clubs where protesters have, at times, gathered.