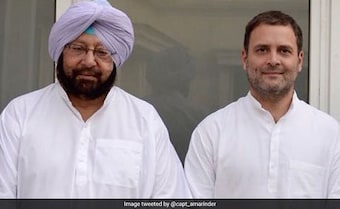 Punjab Chief Minister Captain Amarinder Singh would prefer to have a young leader to galvanise the Congress after Rahul Gandhi’s “unfortunate resignation” as party president, the party’s state unit said in a statement today.

The Chief Minister has asked the Congress Working Committee, the party’s top decision-making body, to look for Rahul Gandhi’s replacement in a “charismatic Gen Next leader, who can enthuse the people with his pan-India appeal and grassroots presence”.

“The Congress needs young blood to galvanise its rank and file, and once again make it India’s preferred and only choice,” said Amarinder Singh in the statement. “The leadership of the party should be such that it reflects the realignment of its vision to the evolving aspirations of the nation,” he added.

The Congress may choose between Sushil Kumar Shinde and Mallikarjun Kharge as new party president, sources said. Mr Shinde, 77, a former Maharashtra Chief Minister and former union minister, is seen to be the most likely candidate to head the Congress. He was the party’s nominee for vice president in 2002. Mr Kharge, 76, suffered his first election defeat in a decades-old political career in the recent Lok Sabha polls. Mr Kharge has also been a union minister in more than one Congress government.

After unfortunate decision of @RahulGandhi to quit, hope to see another dynamic youth leader as @INCIndia president to galvanise party. Urge CWC to take note of young India’s need for a young leader, aligned to aspirations of its large youth population & with grassroots connect.

Rahul Gandhi has said he had left it to his party to find a successor soon, taking responsibility for a second straight national election defeat. “Accountability is critical for the future growth of our party. It is for this reason that I have resigned as Congress president,” he said in a letter he tweeted hours after declaring that he was no longer the party president on Wednesday.

Rahul Gandhi, who took over as party chief from his mother Sonia Gandhi in 2017, had quit on May 25, days after the Congress ended up with just 52 of 543 Lok Sabha seats, pulverised once again by the Prime Minister Narendra Modi-led BJP. But he made it official in his letter, after which the designation of “President” also vanished from his Twitter bio.

“Rahul had shown the way for youth leadership to take the party’s reins and steer it to greater heights… Any change in the party leadership must reflect India’s societal reality, with 65 per cent of its population under 35,” said Amarinder Singh.

He said Rahul Gandhi’s decision to stand firm on his resignation was a major disappointment and setback for the party, from which it could recover only under the “dynamic leadership of another young leader”.

“Only a youth leader could revive the grand old party,” said the Chief Minister.