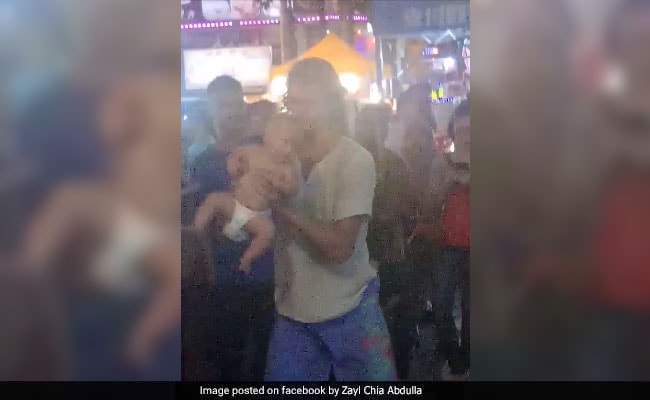 A Russian couple accused of violently swinging their four-month-old baby during a street performance to fund their world tour have been detained, Malaysian police said Monday.

The buskers, a 28-year-old man and his 27-year-old wife, were picked up after trying to woo spectators in the heart of the capital Kuala Lumpur.

“We detained them on Monday for questioning over the alleged abuse of their four-month-old baby girl,” Mazlan Lazim, the Kuala Lumpur police chief, told AFP.

A 90-second video clip of the incident, which went viral on Facebook on Sunday, showed a man in blue shorts and a white T-shirt swinging the infant between his legs and lifting her above his head to the beat of some music in the background.

A woman believed to be his wife was seen sitting on the floor with a placard that read: “We are travelling around the world…”

A crowd of curious onlookers gathered to watch the performance but a man is overheard in the video saying: “It’s stupid. You cannot do this.”

The Russian couple had entered Malaysia from neighbouring Thailand on Friday, police said.