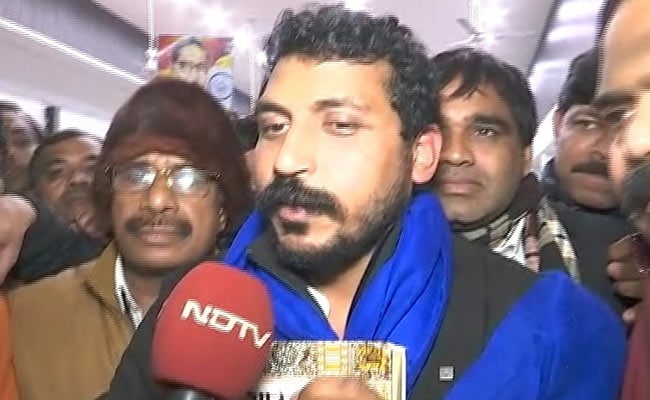 Chandrashekhar Azad, charged with rioting and arson, walked out of Tihar Jail on Thursday

Out on bail after spending nearly a month in prison over his protest against the citizenship law at Delhi’s Jama Masjid, Bhim Army chief Chandrashekhar Azad aka “Raavan” says he had not made any speech at the Jama Masjid when he was arrested, rather just read the Preamble of the Constitution.

“We have been working according to the Constitution and we will continue to do that… Is it a crime to read the Preamble? …Delhi Police is helpless in front of the centre,” he told NDTV after walking out of jail.

A Delhi court granted bail to Chandrashekhar Azad on Wednesday but with conditions. He has been asked to leave Delhi within 24 hours of his release from jail and to stay out of the city for four weeks.

Chandrashekhar Azad says he will appeal before the court over the restriction imposed on him. “Court gave me relief. I have faith in the judiciary,” he said.

On Wednesday, the court tore into the police for failing to produce evidence of its charges against Azad.

“It is one’s constitutional right to protest,” the court said.

The Bhim Army chief was arrested on December 21 over a dramatic protest a day before at Jama Masjid in the old quarters of Delhi, where he slipped away after being taken into custody. He was arrested a day later and charged with arson and rioting.

Judge Kamini Lau was furious when the prosecutor referred to Mr Azad’s social media posts to argue that he had incited violence and read out the Bhim Army chief’s tweet about going to a dharna in Jama Masjid. “What is wrong with a dharna? What is wrong with protesting? It is one’s constitutional right to protest,” said the judge.

“Where is the violence? What is wrong with any of these posts? Who says you cannot protest…have you read the constitution?”

The judge also noted: “You are behaving as if Jama Masjid is Pakistan. Even if it was Pakistan, you can go there and protest. Pakistan was a part of undivided India.”

In his bail request, Mr Azad had said the police had arrested him “mechanically” without following the due process of law.