Chelsea defender David Luiz has opened up on the sadness of the whole squad following Cesc Fabregas’ emotional farewell in the FA Cup victory over Nottingham Forest, and revealed the player gave an emotional speech to his teammates in the dressing room after the game.

The Spaniard is expected to complete a €10m move to Monaco this week, and was making his last appearance in a Blues shirt at Stamford Bridge.

Captaining the side, he missed a penalty in the first half when the scores were level, but this faded into oblivion once his side had cruised to a 2-0 lead by the time left the field in the 85th minute to a standing ovation and vociferous serenade. After the final whistle, he returned to the field, where he applauded all four stands before leaving the pitch once and for all with tears in his eyes.

And, speaking to ​ESPN, Luiz admitted that it wasn’t just the player himself who felt the emotion: “I think not just [emotional] for him, for everybody. One of the best players playing in England was him, everyone knows that.

“I think he won everything with this club. My memories are always going to be with the world-class player, with the great technique. He’s a great guy.

What a career he’s had at the Blues! pic.twitter.com/GaFpFKFU1T

“He did a speech [in the dressing room] and then after that we all said thank you and hugged him.”

Asked what the contents of this speech was, ​Luiz declined to answer, explaining: “No, it’s not etiquette. If he wants to say, it’s going to be him, not me.

“It’s always difficult to lose players, especially like him, because like I say he’s a world-class player but also I understand it’s part of the process. If it’s better for him and better for the club, we have to understand that.

Though ​Fabregas was far from the starting lineup at the end of his time with ​Chelsea, Maurizio Sarri has conistently reiterated his belief that the 31-year-old was the only player technical enough in his squad to replace Jorginho in the central role, and Luiz echoed these thoughts. 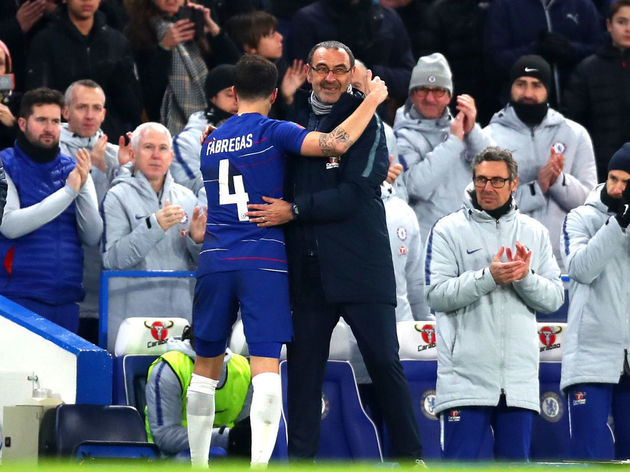 The Brazilian admitted: “Even if he was not a regular this season, he was an important player for us — he had another great game [against Forest].

“He has experience. He knows football. I think he had the opportunity to learn in many different changing rooms when he was so young, before, so he brings confidence, energy for the team, and then on the pitch he showed that it doesn’t matter the game, he’s always going to show his qualities.

“It’s sad. It’s really sad for us. We are wishing him all the best, because he deserves it.”

Gareth Bale Linked With Sensational Return to Tottenham as Future at...