Huddersfield manager David Wagner has claimed that his side were ‘1000%’ denied a clear penalty in their 0-0 draw away to Cardiff on Saturday afternoon.

The low quality Premier League affair failed to produce many moments of interest, but the one notable incident of the game saw referee Lee Mason point to the penalty spot after Joe Bennett seemed to bring down Florent Hadergjonaj, only to reverse his decision after consulting with his assistant Stuart Burt.

DW on the penalty that got overturned:

“I don’t know what the linesman meant when he spoke with me, so I’m not sure I’m the person to ask about this.

“You would have to ask the officials what happened.”#CARHUD #htafc (DTS) pic.twitter.com/lKG8BtJxR2

Speaking after the game, as reported by ​Sky Sports, Wagner said: “I think the footage speaks for itself, it was clear holding and 1000% a penalty from my point of view. The referee has seen it and the referee has given it. Then for whatever reason, the linesman had an opinion as well.

“He said to me the first one wasn’t a penalty and the second one I haven’t seen – I don’t know exactly what he meant. We will obviously speak to him because it is a decision that is anything but understandable and it’s cost us points today.

“To be totally honest, I don’t know how many times this has now happened to us or against us. I don’t know why. You will have to ask the men in black.” 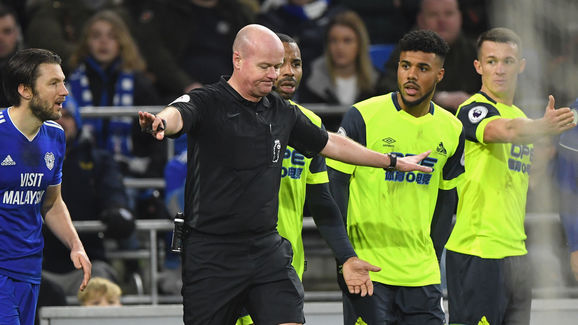 Along with ​Burnley, the Terriers have not been awarded a single league penalty this season, and with ​Cardiff also struggling to score from open play, a chance from the spot would have likely settled the clash.

​Huddersfield can however take consolation knowing they’ve ended their disappointing run of eight straight defeats, but would have felt disappointed not to claim all three points.

Wagner added: “Performance-wise and in terms of attitude, I think we left everything out on the grass. There was only one team who deserved to get anything out of this game. We looked solid and looked to play football. We had the chance with the penalty but for some reason the referee hasn’t given it to us.

“Nothing has happened so far and right now we all just have to reflect on this game, and the result, and we all have to come together and come up with a solution.”​

US issues warrant to seize Iranian tanker off Gibraltar