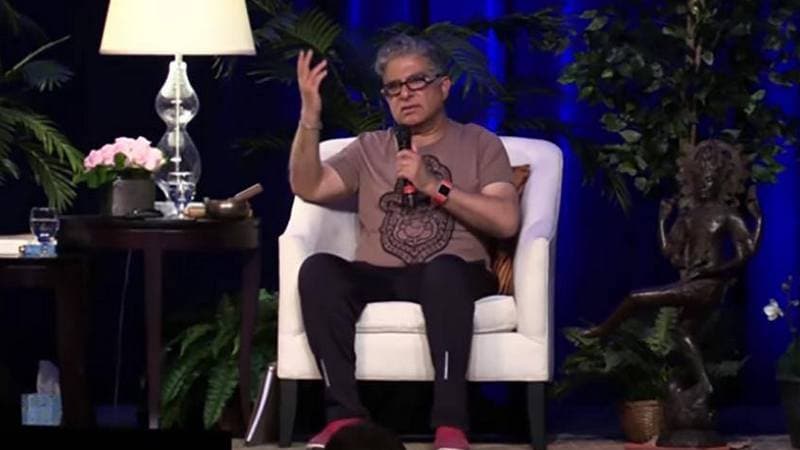 Deepak Chopra pulls back his sleeve to show me his Fitbit. His heart rate is 69 beats per minute.

“I can consciously bring it down,” he says. “This technology is helping me become a better Yogi.”

Chopra, a physician and celebrity wellness adviser, is known for promoting the benefits of meditation – clearing the distractions that clutter the mind. Now he’s become a gadget guy, embracing the industry many think is making us less healthy and less happy.

He collects data on his sleep, his breathing and his stress. He lives in a “smart home” that controls his circadian rhythms through internet-connected lights. And he thinks all of us should, too. “I think in today’s age everybody is a tech guy. You have to be, otherwise you become irrelevant,” he says.

We’ve met to walk the halls of CES, the tech industry’s largest annual trade show. It’s the most-connected, most-surveilled, most-overstimulated place on earth. I had expected Chopra would take one look at me, a tech journalist, and recommend unplugging – perhaps long walks on the beach, or moving to a yurt.

Boy was I wrong. Chopra’s prescription for what ails technology is more technology, just used in a different way. It goes way beyond meditation apps.

“I’m an optimist by nature, OK, so that includes technology,” he says. He recalls his first high-tech encounter, when he was introduced to a television upon coming to the U.S. in 1970. “In colour, with a remote control – it blew my mind,” he says. “The first time I saw a fax machine, I couldn’t believe it. Somebody told me, You know you’re going to have video fax in the future. I said no.”

Today, Chopra has financial interest in being a tech evangelist. He gives talks to Silicon Valley companies, uses Facebook and Twitter to build an audience, and has his own wellness app called Jiyo. And he’s an adviser to a tech company called Delos, which brought him to CES to talk about its smart-home software called Darwin, which Chopra uses in his New York home. It gathers data about air, water and lighting and controls it using algorithms Delos says promote “cardiovascular, respiratory, sleep, immune and cognitive health.”

I have little doubt Chopra thinks deeply, and regularly, about tech. His ready answer to “Are we living in a simulation?” is practical, not dystopian. “Yes, I think your body mind and the world that you experience is a human construct. And what we call the universe is human experience through a human nervous system,” he says.

Chopra does have a tech diet. He wakes at 5 a.m. to meditate and exercise. Then he spends an hour focused on “mindful technology,” including posting and interacting with people on social media. For the rest of the day he keeps his iPhone XS Max with him, but not out. In the afternoon, he dives back in for focused time with emails. “Even technology is a meditative experience because when I’m focused on technology, that’s all I do,” he says.

He acknowledges the tech industry’s recent challenges with data lapses and misinformation, which he likens to puberty. “Mistakes will help us evolve better technologies,” he says. Regulation is necessary, and coming soon, he predicts.

A single tweet from President Donald Trump can cause “mass inflammation,” he says. Yet that makes him no less optimistic about technology. He sees the internet as a kind of “global brain” that can be rewired.

Chopra says he was recently watching a 2-year-old play on an iPad. “The new generation of children, their brains are going to be totally different,” he says.

Indeed, that terrifies many, I respond – perhaps that 2-year-old should have been outdoors, playing with wooden blocks. “Why can’t the kid do both?” he says. “You know, the fact is, every time a new development happens, there’s a school of thought that this is going to ruin humanity.”

For example, Delos, the company he advises, uses data to help bring people’s homes into better harmony with the natural world. It wakes residents with blue light, and it helps them get to sleep by shifting to yellow in the evening.

“In the past, you didn’t need circadian lighting because you went to sleep when the sun set and you woke up and the sun rose. But ever since the invention of the lightbulb, we are able to violate everything that is possible to violate to ruin our biology. So now we have to resort to technology to bring us back to our natural state, which is oneness with the environment,” says Chopra.

So we just have to accept more surveillance as the price of this new way of living? “For the advancement of your well-being, what’s wrong with that?” he says.

But if we turn our homes and our bodies over to algorithms, how do we know they have our best interests at heart?

He’s not alone in that view. Earlier this week, Apple CEO Tim Cook told CNBC, “I believe, if you zoom out into the future, and you look back, and you ask the question, ‘What was Apple’s greatest contribution to mankind?’ it will be about health.”

Chopra lays out a remarkably specific vision of how tech will evolve our lives: “The future of our well-being and the future of technology are tied in,” he says. “I believe that in five years from now, when you go to see a physician, instead of getting a prescription, you might get a technology session for reducing inflammation in your body or regulating a blood pressure.”

Moving to a yurt would be like giving up. “I believe technology is part of human evolution, and it’s here to stay. If you don’t adapt to it and you don’t use it creatively, then according to Darwinian principles, you will soon be extinct,” he says.

Xiaomi Mi Soundbar to Go on Sale in India At present...