​Tottenham’s injury woes have worsened with the confirmation that Dele Alli is set to be out until at least March, joining club captain Harry Kane on the long-term absentees list.

The English midfielder was instrumental in getting Spurs back on track in the 2-1 win over Fulham on Sunday, netting the 51st minute equaliser that set them on their way to victory.

However, he could not make it through the entire game, pulling up in the 83rd minute with a clear hamstring issue. 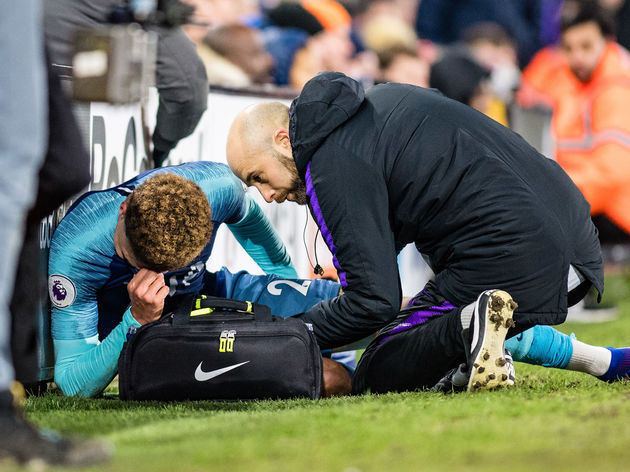 Ultimately, his replacement Georges-Kevin N’Koudou proved himself worthy, as he provided the crucial assist for Harry Winks’ last gasp winner.

However, it looks like the Frenchman will now have to reprise this role in earnest for the coming months, after Tottenham revealed the extent of Alli’s injury on twitter.

In an official statement, the club disclosed: “Following scans and clinical assessment, we can confirm that ​Dele Alli has suffered a hamstring strain, sustained during Sunday’s match.

“Dele will now undergo a period of rehabilitation with our medical staff, with the expectation of returning to training in early March.”

Following scans and clinical assessment, we can confirm that @dele_official has suffered a hamstring strain, sustained during Sunday’s match.

Dele will now undergo a period of rehabilitation with our medical staff, with the expectation of returning to training in early March. pic.twitter.com/BalHwgBFHZ

The news comes with ​Spurs still reeling from the injury to club captain ​Harry Kane, who is also now out until at least March with ligament damage in his ankle. The Lilywhites will now be enforced to cope without their English duo for the next couple of months, during which time they face a flurry of key fixtures.

They face Chelsea in the EFL Cup semi final second leg this Thursday, before an FA Cup Fourth Round clash with Crystal Palace. And, after three fairly negotiable Premier League ties, they have their Champions League last 16 tie with Borussia Dortmund to navigate in February, which is sandwiched by league clashes against Burnley, Chelsea and Arsenal.

Why Dries Mertens Remains So Important for Napoli After Equalling Diego...

Ali Riley Column: It's Time for the Biggest Game of My...